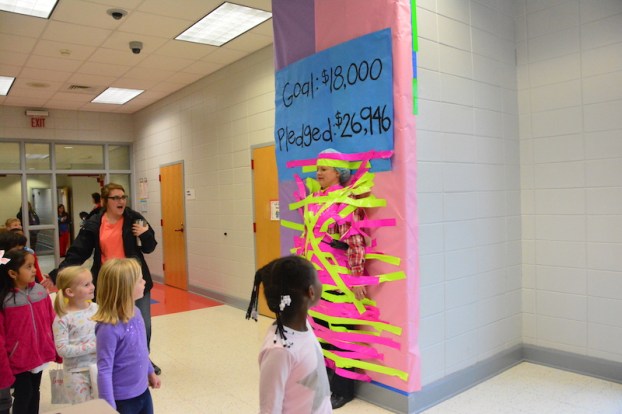 MVES Principal Rachea Simms greets students while taped to the cafeteria wall to reward students for raising over their goal of $18,000 at Warrior Run. (Reporter photo/Amalia Kortright)

ALABASTER – After students at Meadow View Elementary School exceeded their fundraising goal through the Warrior Run event a week before, Principal Rachea Simms found a creative way to reward them on the morning of Friday, March 23.

The day began with Simms getting pied in the face by kindergartener Addie DeRamus, who was this year’s top fundraiser and collected $807 for the school on the MVES closed-circuit television network.

This is the second consecutive year that Addie DeRamus has raised the most funds for the school. She said she had fun being on TV and throwing the pie in Simms’ face.

Her parents, Misty and Michael DeRamus said they were able to raise the money through donations from family and coworkers.

They expressed their appreciation to Simms for giving their daughter the opportunity.

“It gives the kids an incentive to raise the money,” Misty DeRamus said. “Things like this are cool.”

Because students raised $26,946, thousands of dollars over their goal of $18,000, Simms spent almost the duration of the morning taped to the wall in the cafeteria. Phrases like, “Are you going to be in there all day?” and “We hope you get out in time for spring break,” were heard as students walked by.

“Our mission statement talks about community, and the Warrior Run,” Simms said.

Simms said being taped to the wall reinforced the character trait of perseverance, which was emphasized to students at the Warrior Run.

“They work hard, and we try to instill in them that if you work hard, things pay off,” Simms said.

According to Simms, the funds will go to improve the school’s outdoor basketball court, playground and outdoor classrooms.