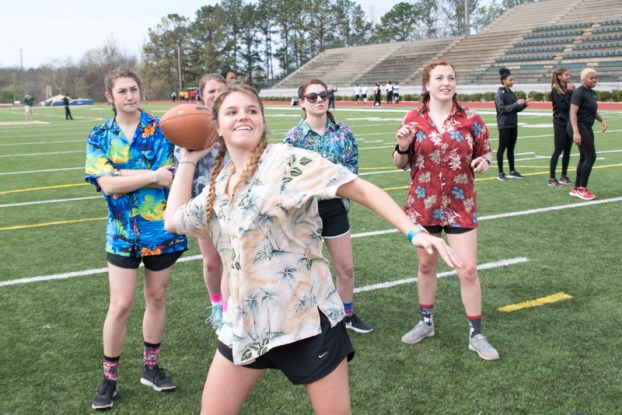 A PHS senior readies herself to throw a football through the field goal post. (Reporter photo/Keith McCoy)

PELHAM – Senior Field Day was the kickoff to several events leading up to graduation for Pelham High School seniors. Students said the event, which was held on Friday, March 23, was bittersweet because it marked the beginning of the end.

“It’s going by too fast,” said senior Megan Tyree. “This is the first event marking the end of senior year.”

What made field day even more fun for students was that they were able to name and pick their own teams and team uniforms prior to field day. With some teams including special needs students, Creel said field day was also a unifying event.

The game, called “Junk in the Trunk,” was just one of many games PHS seniors played. Students did everything from cartwheels and backbends trying to shake ping-pong balls out of a tissue box strapped to their waists.

“I think we only won like one event, but we still had a blast,” said senior Destiny Northcutt. “It’s friendly competition. It’s our final year and we just want to have fun together as a class before it’s all over.”

Students had only a short amount of time to rack up as many points as possible at each of the nine games spread out around the school’s track and football field.

“What I love most about field day is that every student is involved because they rotate turns at each game, and whether you’re athletic or not you can still participate and have fun,” Creel said. “Nobody sits on the sidelines here. There are kids who have never played on any sports team and they come out here and they’re competitive but most of all everyone has fun.”

Students were treated to lunch before being dismisses around 1 p.m. and being allowed to leave school early.

To see more photos from field day, go to Shelbycountyphotos.com