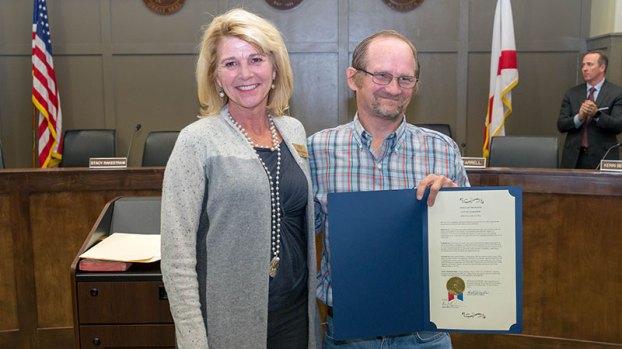 ALABASTER – A man who spends many hours of his free time each week ridding Alabaster’s roadsides of trash and organizing ways to support the city’s first responders and residents in need found himself in spotlight during a recent City Council meeting.

Ellison has been living in the Alabaster community nearly his entire life, and has always worked to make his city a better place. In addition to working with the Carmeuse Lime company in Alabaster for many years, Ellison has volunteered countless hours to showing appreciation for local first responders and cleaning up trash on the city’s roadways.

Ellison estimates he has picked up “hundreds” of bags of trash since early 2017, and even set out trash cans along the side of Smokey Road in an effort to cut down on the rubbish littering the highway.

“Volunteering time, talent and resources has been, and continues to be, the essence and tradition of our country. It is essential to the spirit and vitality of a community,” Handlon said while reading the proclamation. “John Ellison exemplifies the essence of a true servant in his steadfast commitment to our community. He graciously leaves his footprints throughout the city he loves.”

Since 2014, Ellison and other local volunteers have been supporting the city’s first responders through the Public Servants Foundation, and regularly brings the city’s police and firefighters everything from pallets of water and Gatorade to meals for entire shifts on holidays. He has organized multiple appreciation dinners for the Alabaster Police Department and Alabaster Fire Department over the past few years.

In late 2017, Ellison expanded his efforts to help local families facing crises by founding the Give-Backers organization. Volunteers with the group have collected donations to give to residents who have lost homes to fires and other unforeseen tragedies.

“John works tirelessly to help others. His next mission found a way to help others in a time of need. He created the Alabaster Give-Backers, whose mission is to lend a helping hand to those recovering from an unexpected disaster,” Handlon said. “When he’s not working at his full-time job, supporting our Public Safety Departments, and collecting and sorting donations for disaster victims, you can find John cheerfully picking up trash along different roads in our city.”

During the meeting, Handlon presented Ellison with a copy of the proclamation and recognized him in front a room full of supporters.

“He has done such a great job, and has set such a great example in our community,” said Ward 1 Councilwoman Sophie Martin.

ALABASTER – An Alabaster man was recently taken into custody and charged with multiple drug-related offenses. David Tanniehill, 48, who... read more