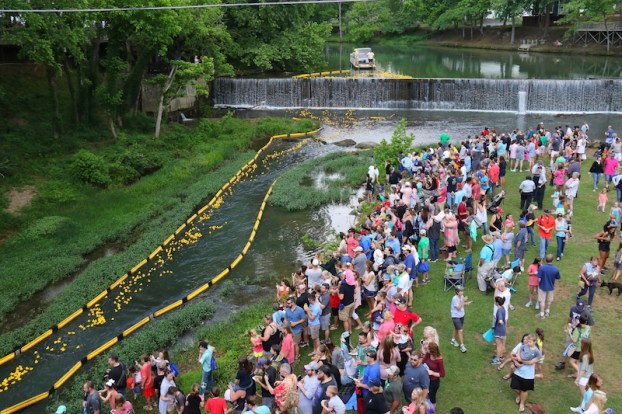 The Buck Creek Festival duck race will return Saturday, May 12, at 3 p.m. Tickets to purchase ducks will go on sale at the end of March. (File)

HELENA–On the afternoon of Saturday, May 12, hundreds and even thousands of spectators will line the banks of Buck Creek as the creek will quickly turn into a sea of yellow.

The fan favorite rubber duck race is set to return for another year to the Buck Creek Festival at 3 p.m. on May 12, as it serves as the most significant fundraiser for the festival.

Those unfamiliar to the duck race should plan to arrive at the banks of Buck Creek early to secure a spot as an automatic dumper attached to a pontoon boat will dump thousands of rubber ducks into Buck Creek that’s become a sight worth seeing.

Once the rubber ducks cross the waterfall and make their way down the creek, some important personnel to keep an eye on are the duck wranglers wading in the water.

“We usually have around 10 or so duck wranglers that help out,” longtime Buck Creek Festival volunteer Cris Nelson said. “We have to have so many to corral ducks before they escape and go down the Cahaba River. We normally say the duck wranglers act as the several tiers of defense.”

Prior to the festival, anyone is allowed to sponsor a duck to be entered into the race. Duck tickets may be purchased at local Helena businesses including Beef ‘O’ Brady’s, the Helena branch of Regions Bank, Oh My Sole, The Depot or The Petal Cart in Pelham.

Tickets for the duck race will go on sale at the end of March and may be purchased individually for $5 or a flock of ducks may also be purchased.

A flock of ducks consists of five ducks at a cost of $25 that also includes a Buck Creek Festival T-shirt.

The lucky person whose duck crosses the finish line first will win $500, followed by $250 and $100 for second and third place.

The leftover proceeds from the duck race will benefit the Helena High School Band Boosters as the 2017 race raised $11,280 to help support the program.

By GRAHAM BROOKS / Staff Writer HELENA–The second weekend in May means more in the city of Helena, as it... read more