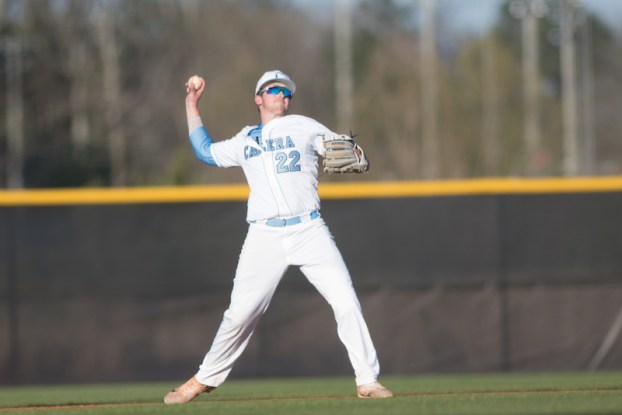 BRADENTON, Fla. – In a baseball tournament that features some of the best baseball teams from the state of Florida, the Calera Eagles are participating in the 2018 IMG National Classic in Bradenton, Florida, March 26-28.

Bartram’s biggest highlight in the last few years was a runner-up finish in the FHSAA Class 6A state championship game. Flanagan tends to be a playoff team more often than not in the state and won three state championships in Florida’s highest classification from 2005-2010. Below is a recap from both games.

In game one of the tournament, Calera was able to pick up its fifth straight win and ninth in its last 10 games with a strong 9-2 victory against Bartram.

The Eagles improved to 14-2 with the win thanks to 11 hits offensively and six combined runs in the first two innings.

Kevin Dowdell started the game with a leadoff walk in five pitches to put the first runner aboard. Two batters later, Tyler O’Clair was able to single on a line drive to right field that drove in Dowdell for the game’s first run after he had already stolen second base.

A second consecutive hit came from Graham Blankenship when he doubled to left field to put two runners in scoring position with one out. A pop out one batter later put two down in the inning, but Christian Hall was able to plate two more runs with a single to center field that scored O’Clair and Blankenship.

In the second inning, Calera went right back to work.

After a groundout to start the inning, Dowdell reached base for the second consecutive inning thanks to a single to right field. That was followed by a John Ellison walk to put two on with one out.

That was just the start as O’Clair and Blankenship each followed with RBI-singles to give the Eagles a 5-0 lead. Two batters later, Hall stepped back to the plate and picked up his third RBI of the game with a single to left field that gave Calera a 6-0 advantage at the end of two innings.

Bartram sprinkled in two runs in the sixth and the seventh innings, but the Eagles scored three runs for the third inning of the game in the top of the seventh to put it out of reach.

Those three runs came off a two-RBI double from Graham Blankenship and an RBI-single from Mason Blankenship.

Jacob Smith got the start on the mound and allowed five hits and one unearned run while striking out 11 batters.

Despite a strong start defensively that featured a pitchers dual between Frank Gonzalez and O’Clair for the first three innings, Calera couldn’t get any offense going and fell in the quarterfinals to the Florida Class 9A school.

O’Clair was able to get through the first three innings allowing five base runners and just one hit to keep the Eagles tied 0-0 for the time being.

Gonzalez, however, was able to take a no-hitter through five innings of the game to keep Calera at bay before being replaced in the sixth inning.

He was replaced after the offense was able to bust the game open with seven runs in the top of the fifth thanks to three walks, two singles, a triple and a steal of home.

Needing a spark, Calera was able to load the bases in the bottom of the sixth inning with just one out, but a double play ended the threat abruptly as Flanagan went on to pick up a 7-0 win.

The only two Calera players to pick up a hit in the game were Ellison and Graham Blankenship.

After the loss, Calera moved to 14-3 so far this season as they remain a clear contender in Class 5A this year.

The Eagles will take on in-state foe Huntsville on Wednesday at 1 p.m. with a chance to advance to the fifth-place game on Thursday.