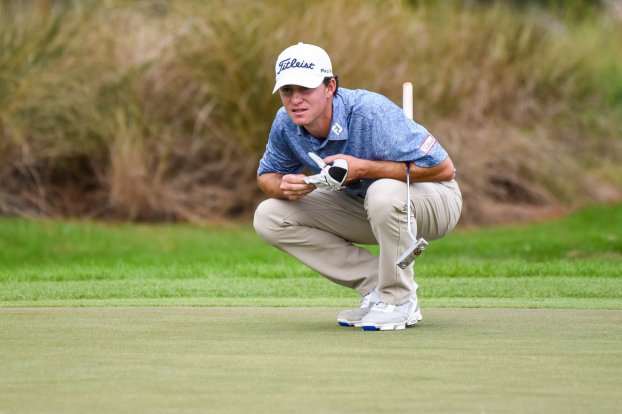 Michael Johnson finished in a tie for fourth in his most recent Web.com Tour tournament, which moved him inside the tour's all important top 25 on the money list. (Contributed)

Former Spain Park and Auburn golf standout Michael Johnson is in the midst of his second season on the Web.com Tour as he looks to make adjustments and improvements from his first season in 2017 so he is where he needs to be at the end of the 2018 season to make the PGA Tour.

Early in the season, through six events, Johnson looks to have made several adjustments and is right where he needs to be to achieve his goal.

Last season, Johnson played in 24 events making 10 cuts and being cut 13 times while finishing inside the top 25 four times, but inside the top 10 just once.

He finished 63rd on the money list, which was 38 spots outside of the top 25 players that earn a PGA Tour card at the end of the season to play at the highest level of professional golf.

In four of his first five events during 2017, Johnson was cut before finishing T25 and T55 in his next two events. He then missed five consecutive cuts to close out the first half of his season.

While he is just halfway to that point in 2018 through six events, Johnson’s improvement has been vast.

So far this season, he has been cut just twice in his six events, but more importantly, Johnson already has more top-10 finishes through those six events than he did in 24 total tournaments last season.

In the first tournament of the new year, Johnson finished in a tie for ninth at the Bahamas Great Exumas Classic for a top-10 finish through one tournament.

In his most recent event, the Chitimacha Louisiana Open, held in Broussard, Louisiana, Johnson finished in a tie for fourth with a four-day tournament total of 13-under par.

It marked his second highest finish on the Web.com Tour after finishing in a tie for second at last year’s Pinnacle Bank Championship with that same score of 13-under par.

It’s because of his three top-15 finishes and two top-10 finishes that he has seen the money roll in, but more importantly, Johnson is No. 20 on the money list, which currently puts him inside the necessary top 25 that punch a ticket to the PGA Tour at the end of the season.

That being said, last year’s final spot on the top-25 list went to Beau Hossler with a total of $164,326, showing Johnson has plenty of work ahead of him.

On the PGA Tour, Johnson already has a third-place finish at the Barbasol Championship in 2016, where he missed out on a playoff by one shot, and he also finished tied for 18th at last year’s Sanderson Farms Championship.

Both of those strong runs show he has what it takes to compete at the highest level, but with 21 events still left on the tour this season, Johnson needs to finish out his 2018 Web.com Tour with several more top-10 finishes.

As part of the infamous class of golfers that featured superstars such as Jordan Spieth and Justin Thomas, many have been waiting for Johnson to break through and earn a spot on the PGA Tour, thinking he could be the next young gun to make some noise.

By ALEC ETHEREDGE | Sports Editor  It’s been an up and down year for several of the county’s best girls... read more