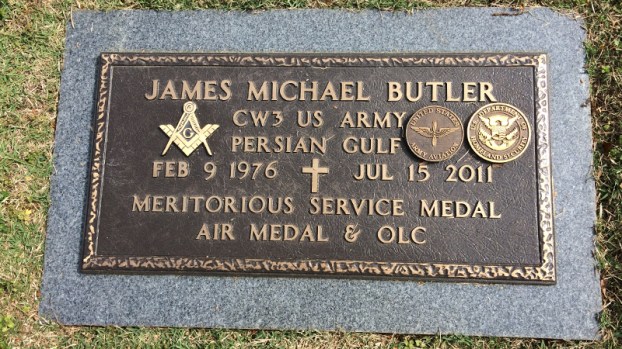 The Alabama Fallen Warriors Project is working to raise money to fund a bronze bust honoring the memory of fallen Alabaster native James Michael Butler, who was killed in a vehicle crash while awaiting deployment at Fort Hood, Texas, in 2011. (Contributed)

ALABASTER – About a month ago, Alabaster residents Jim and Jennifer Butler received a surprise – but welcome – call from U.S. Navy veteran and local volunteer Mark Davis. While it was unexpected, it’s a call they will never forget.

“It was an honor for us to even get that call, and for us to know that this could possibly happen,” Jim Butler said during a March 28 interview as he and his wife laid flowers on their son, James Michael Butler’s, grave. “We are looking forward to it coming to fruition. The fact that it could be done is such an honor.”

James Michael Butler, a Thompson High School graduate, left a lengthy legacy of service to his country, including time as a federal air marshal, a border patrol agent and a Shelby County Sheriff’s Office deputy. While serving with the U.S. Navy, James Michael Butler earned the air assault badge and parachutist badge, and served in the 20th Special Forces Group in support of Operation Enduring Freedom.

“We lived in Alabaster for many years, and our kids went to all the Thompson schools. We’ve got a connection with Alabaster, so I wanted to start there,” Davis said, noting Alabaster resident Debra Kabcenel put him in contact with the Butler family.

Davis and the Fallen Warriors Project have worked to raise money to construct memorial busts in Hoover’s Aldridge Gardens, Mobile, Auburn, Tuscaloosa and Roebuck, and have seen great community support for their efforts.

Each bust comes at a cost of $11,000, and includes wax sculpting by retired Marine Col. Lee Busby, final bronze casting, a stone pedestal and a bronze plaque honoring the soldier’s legacy.

Work on the bust can begin once about $5,000 of the cost is raised, and the soldier’s family is invited to provide input during sculpting to ensure accuracy, Davis said.

Once the bust is funded, the family will decide where to install it. Davis said locations under consideration include Thompson High School, the Albert L. Scott Public Library, Alabaster City Hall or Veterans Park.

The Fallen Warriors Project is currently seeking donations to cover the cost of the Shelby County memorial busts. To donate to the project, contact Davis at 266-0632 or email markd@veriphase.net.

“We need to build these four busts to honor the solders from Shelby County who have fallen,” Davis said. “There have been 120 Alabama soldiers killed since 9/11. We’re nine busts down and 111 to go.”