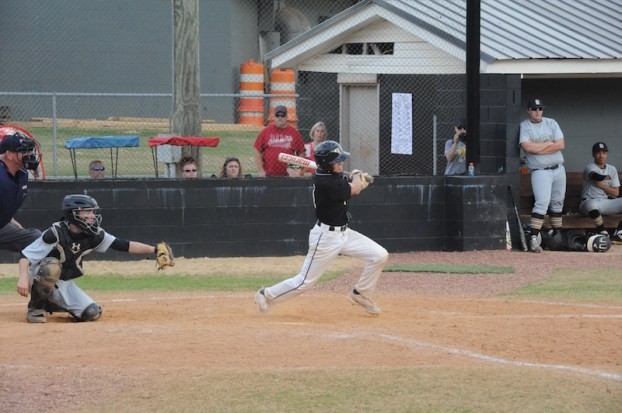 Vincent's Cole Fincher, above, was able to score the game-winning run and stole two bases during the game. (Reporter photo/Alec Etheredge)

VINCENT – Trailing 4-3 and down to the last inning of play, the Vincent Yellow Jackets needed a final-inning rally against Lincoln High School to pick up a second win as host of their own spring break tournament on Tuesday, March 27.

Thanks to a leadoff single from Robbie Albright in the inning, the Yellow Jackets were off to a great start and used base running to their advantage to capitalize on the opportunity.

During Cole Fincher’s at bat, Albright stole second to quickly get into scoring position with no outs. That was followed by a passed ball that allowed Albright to make his way to third base with no outs in the inning.

With the Lincoln pitcher a little rattled, Fincher took advantage and hit a hard ground ball up the middle that allowed Albright to come in for the game-tying run.

Despite tying the game, Vincent wasn’t going to get any less aggressive as the Yellow Jackets wanted to take the lead heading into the bottom half of the inning.

In almost identical fashion, Fincher was able to steal second base, before a passed ball allowed him to move over to third with still no outs in the inning.

After a walk put runners on the corners, Caemon Jernigan hit a deep fly ball to center field.

Fincher tagged up, and sprinted home, while the center fielder loaded up and fired a rocket throw to try and nail Fincher at the plate. In a bang-bang play, Fincher was able to slide narrowly passed the tag and across the plate for the go-ahead and eventual game-winning run.

The Yellow Jackets went on to load the bases after that, but were unable to bring another run home. They did, however, do all of the damage they needed to after the aggressive base running led to a 5-4 lead heading to the bottom of the seventh.

After driving in the go-ahead run, Jernigan stepped on the mound to close out the final inning of play and did so with relative ease to secure Vincent’s 5-4 win.

The Yellow Jackets also struck first in the game with a two-run opening inning to take early control.

Vincent did so behind a leadoff triple from Albright, who scored shortly after on a passed ball for the 1-0 advantage. Fincher then walked and after picking up his first of two key stolen bases in the game, Christian Henderson lined an RBI-double to outfield that gave the Yellow Jackets a 2-0 advantage.

Lincoln was able to add two runs of its own in the bottom of the second to knot the game up at two apiece.

Vincent gave up one more run an inning later, but Jernigan made a great defensive play at one point during the inning to get the lead runner at third, before the team was able to get out of a bases-loaded jam just giving up one run.

Lincoln tacked on one more run in the bottom of the fourth, but Vincent was able to chip away at the deficit in the top half of the fifth. Fincher picked up a one-out triple and was eventually able to score on an error, which brought the Jackets to within a run.

That led to the thrilling seventh inning where Vincent was able to pull off the come back and even their tournament record up at 2-2.

The win was part of a strong stretch for the Yellow Jackets, who have already locked up their area championship this season and are prepping for a deep run to end the season.