CALERA – A bond reduction hearing has been set for William Jeffrey West, who is accused of killing his wife, Kathleen West. 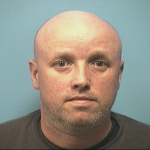 West has been in jail on $500,000 bond since being arrested on Thursday, Feb. 22. On March 20, West’s attorney electronically filed a motion to reduce his bond.

The motion claims that the bond amount is excessive and West has “no possible way” of paying it. The request states that the 44-year-old poses no threat to the community and has friends and relatives who want to help pay his bail.

On Thursday, March 15, a court document was filed showing that West was indicted on the murder charges.

West stands accused of using a bottle of Lucid Absinthe to kill his wife. Kat West’s body was found partially nude by a passing motorist at about 5 a.m. outside her home on the 100 block of Greenwood Circle on Saturday, Jan. 13. Calera Police Chief Sean Lemley said Calera police officers were dispatched to the scene at 5:10 a.m.

The cause of her death was blunt force trauma to the head and she was pronounced dead at the scene.

By NEAL WAGNER / Managing Editor COLUMBIANA – A 47-year-old Trussville veterinarian who is facing child pornography and fentanyl-related charges has been... read more