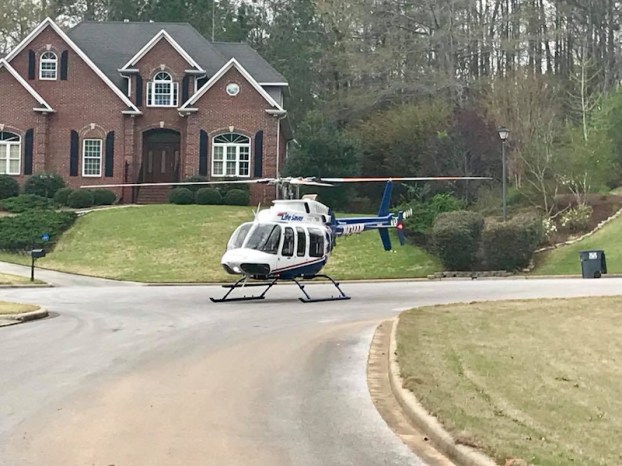 A lifesaver helicopter landed in the Helena neighborhood of Quail Ridge the afternoon of Friday, March 30, to transport a victim of a single-vehicle accident. (Contributed)

HELENA–One person is in critical condition and another sustained serious injuries from a single-vehicle accident that occurred just passed the intersection of Shelby County 93 and Shelby County 277 in Helena the afternoon of Friday, March 30, that resulted in a lifesaver helicopter rescue operation.

The accident happened just after 1 p.m., where the driver of a pick-up truck was traveling on Shelby County 93 and lost control just passed Shelby County 277 and veered off the roadway, according to the Helena Police Department.

“The vehicle left the roadway at 277 and 93 and collided with a tree just off the road and the vehicle rolled onto its side,” Helena Police Lt. Brad Flynn said. “Two people were transported to the hospital. One by lifesaver helicopter and the other by ambulance.”

When officers arrived on the scene, they realized a lifesaver helicopter would be needed.

Because of the number of trees near the crash site, the lifesaver helicopter made an emergency landing in a cul de sac in the nearby neighborhood of Quail Ridge to transport the female victim.

“When lives are in danger and someone needs to get to a hospital as quickly as possible, it takes the close cooperation of not only HPD and HFD, but the amazing work of our regional air medical helicopter service, lifesaver, to make that happen,” the Helena Police Department wrote in a statement. “We wanted to extend a big thank you to our friends with lifesaver and our own Helena Fire Department for their incredible work on a daily basis to save lives. The thoughts and prayers of all of us at HPD are with the patient transported today.”

PELHAM – Pelham Oaks Elementary and Pelham Ridge Elementary will be holding registration events in April for students who will... read more