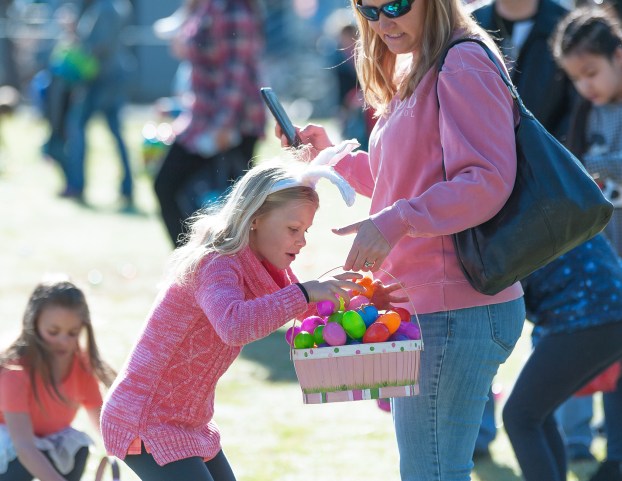 A girl fills her Easter baskets to the brim with candy-filled eggs at the city of Pelham's annual egg hunt on March 31. (For the Reporter/Jeremy Raines)

PELHAM – Hundreds of people showed up for the city of Pelham annual Easter Egg Hunt on Saturday, March 31, at Pelham City Park. It took only minutes for all of the eggs to be scooped up off the field.

The Pelham police and fire departments helped lay a total of 10,600 eggs filled with candy and toys onto the youth football field prior to the event, said Parks and Recreation Director Billy Crandall. Children were split up by age for the hunt.

The Easter Bunny was also at the event taking free pictures with families.

Resident Susan Sungelo, who attended the event with her daughter and 5-year-old granddaughter, said she and her family attend the event every year.

“It’s just a fun and well-organized city sponsored activity that we like to participate in,” she said. “My granddaughter is getting better at actually going out and picking up the eggs. In past years, I think she was overwhelmed with the crowd but this year she understands more of what’s going on.”

New Orleans resident Victoria Mushatt and her granddaughter Nova, who traveled to Pelham to spend the Easter weekend with family, said the egg hunt was a fun event for children to be able to participate in.

“As long as the kids have fun, that’s all that matters,” she said.

“I thought it was really nice and the kids loved it,” he said.

By 9:30 a.m., the field had cleared and not a single Easter egg went unclaimed.

PELHAM – Pelham Oaks Elementary and Pelham Ridge Elementary will be holding registration events in April for students who will... read more