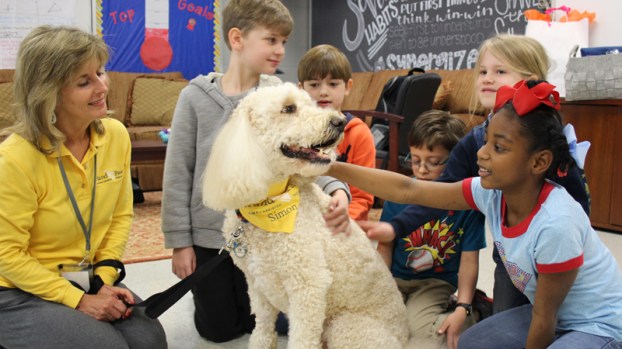 Simon and his handler, Margie Little, left, visit with students during a retirement reception for Simon on March 22 at Oak Mountain Elementary School. (REPORTER PHOTO/STEPHEN DAWKINS)

NORTH SHELBY – Simon the labradoodle and his person, Margie Little, have been there for the Oak Mountain Elementary School community in good times and bad.

On Thursday, March 22, the school showed its appreciation with a surprise retirement reception for Simon.

Little said she was glad she and Simon were able to be a part of the school’s efforts for six years.

“You’ve got to be at the right time in your life, and you have to have the right animal,” Little said. “I just feel so blessed that we were able to do this.”

The school presented Little and Simon, who is about 9 and a half years old and has been working with Hand in Paw for about eight years, with a banner signed by teachers and students, cake and other treats, and gifts including a blanket for Simon to lounge on.

OMES Counselor Hayden Belisle, who organized the reception, said the pair would also be added to the school’s Memory Lane, a display devoted to remembering those involved with the school who have moved on.

“To be able to have all of you here has been such a blessing,” Oak Mountain Elementary School Principal Debbie Horton said.

Several teachers and students stopped by to visit with Simon during the reception.

Little retired from teaching at Leeds Elementary School after about 30 years, and saw a television show with therapy dogs.

She researched whether such a service was offered locally and found Hand in Paw.

Simon was about 6 months old at the time.

“Everywhere I took him, people were really interested in him, and even as a puppy, he was just good,” Little said.

Students had the opportunity to visit with Simon when they were going through hard times, such as when two teachers passed away. Simon and Little, along with Belisle, also visited Oak Mountain High School when students there were dealing with a classmate’s suicide.

Simon helped students who were dealing with trying situations at home, struggling with schoolwork—or those arriving for their first day of school.

Time with Simon was also used as a reward for jobs well done.

“I think they help the teachers as much as the kids,” Belisle said.

Belisle said she was initially skeptical about how the program would fit into already tight schedules.

“What I quickly realized is that the difference these teams have made is remarkable,” Belisle said and noted instances when students made a “complete turnaround” in their work because of Simon’s encouragement.

A second grader one year even wanted to celebrate a birthday at the school with Simon and Max, the other Hand in Paw canine who visits the school.

“That’s just one in a million stories,” Belisle said.