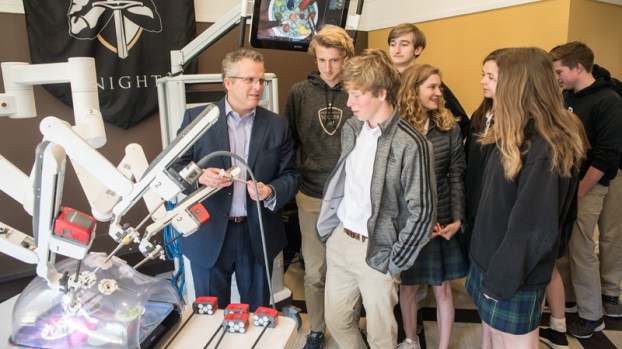 NORTH SHELBY – Westminster School at Oak Mountain students had the opportunity to use a million-dollar surgical robot while learning about the career options that are available to them.

Luke Leonard is a sales manager for Intuitive Surgical based in Sunneyvale, California, who lives and works in the Birmingham area and has a son who attends Westminster. He visited the school on March 9 to demonstrate one of the company’s da Vinci surgical robots.

“We’re always looking for opportunities to put in front of students what they can do,” Westminster Upper School Head Chris Knowles said.

During each session, Leonard asked for two volunteers to act as a surgeon and an assistant and show the difficulty of traditional surgery on a model operating table and compare the capabilities of the da Vinci system.

The da Vinci translates a surgeon’s hand movements into smaller, more precise movements of tiny instruments inside the patient’s body, based on a magnified view through a 3D vision system.

Leonard explained that the robot is used for surgery on soft tissue, such as lungs, kidneys and hernias.

In a traditional open kidney cancer surgery, the surgeon would remove the entire kidney—and possibly have to saw off part of a rib to get to the kidney.

But the da Vinci allows for such a surgery to be performed through an 8-millimeter incision.

“We can spare the kidney,” Leonard said. “Now we go from having to take the whole kidney to just a small part. It saves recovery time, and there’s less pain, as narcotic abuse has become a problem in the U.S. And there’s less scar tissue.

The robot the students used would cost about $1.3 million, Leonard said, and other models cost as much as $1.85 million.

“It sounds like a lot of money, but typically these things pay themselves off after a year,” Leonard said about savings related to quicker recoveries and other factors.

Leonard said he believes God has given gifts to students, and he wanted to help show them that there are avenues for those gifts that they may not have considered.

“We wanted to come educate the kids on technology,” Leonard said. “We’re just trying to help kids connect with their passion. You don’t have to be a doctor to use this equipment. I’m doing what God has called me to do, and God has given me joy.”

Leonard said he knew he wanted to be involved with technology and he has sales skills, but selling products with redemptive qualities makes it more satisfying.

Teachers Dale Carrell and Greg Thompson took 12 physics, chemistry, biology and zoology classes to hear from Leonard and see the robot, and the school’s robotics team also learned about it after school.

“Not everything in the medical field is being an MC who is a surgeon,” he said. “There are a lot of different avenues, and I don’t think our modern kids think that way.”