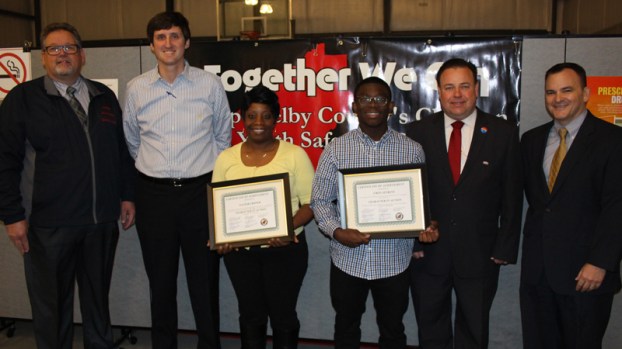 “This is the first month we are expanding into the Hoover school system, and we’re so excited about that,” Littrell said.

The award is based solely on strength of character and not tied to academics or athletics, Littrell said.

Organizers also thought it was important to recognize the students’ parents for their efforts, and Jenkins’ mother Xaviera Roper was on hand for the presentation.

“He is well known for his good choices and work ethic,” Britnell said. “J’Ron promotes positive energy in the classroom as well as outside of the classroom. He is always willing to take on new or unfamiliar assignments and lend a helping hand to others if needed.

“He is a quiet leader among his peers and often leads by example. He always refers to peers and adults in a respectful way. He is known to be a very responsible and dependable student.”

Jenkins has been involved with the Peer Helper program, was a leader in the school’s Pink Week efforts and competes in track and field.

“There’s nothing I ask him to do that he doesn’t accept as a challenge,” Roper said.

Jenkins said he was appreciative of the award but does not seek recognition.

“The things I do, I don’t do it for attention,” Jenkins said.

FROM STAFF REPORTS HOOVER – Gary Dop, a Virginia-based poet, playwright and performer, will offer a reading at the Shelby-Hoover... read more