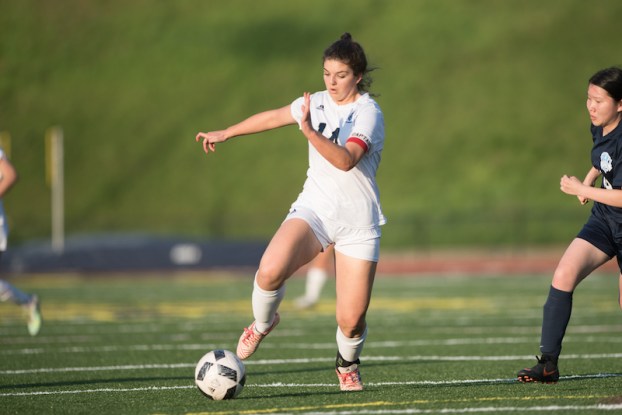 Briarwood's Ellie Sherrod ended the game with two goals as the Lions went on to pick up a 4-0 shutout win of area opponent Calera. (Reporter photo/Keith McCoy)

NORTH SHELBY – It’s been a tough season for the Briarwood girls soccer team as they look to live up to the standard set by last year’s state championship season.

That task has been a tall one as the Lions had won just three of their first 12 games leading to a 3-8-1 record heading into a matchup with area foe Calera on Tuesday, April 3.

After beating the Eagles 6-0 back on March 6, Briarwood had the confidence from that win to take to the field in the second matchup looking for another area victory.

While BCS didn’t reach that total of six goals, the Lions had more than enough opportunities to do so and still ended up pitching a shutout by taking down Calera 4-0 to improve to 4-8-1 overall and 2-0 in area play with games against Shelby County left.

Briarwood got the scoring started against the Eagles within the first two minutes of the game thanks to some impressive ball movement.

Anna Martin found the ball close to midfield before sprinting up the left hand side of the field. Martin eventually found herself outside of the box on the left side before crossing a ball into the middle of the box that found Ellie Sherrod’s foot for the game’s first goal with 38:35 remaining in the first half.

The fast-paced start for the Lions continued over the next eight minutes as they got four more shots that either hit the cross bar, side post or just went wide of the net.

It marked a stretch where Briarwood could have easily added another goal to its lead or even run away with the score.

With the constant attacking it was just a matter of time before another goal was scored and it came when Martin broke away by herself up the middle of the field.

After out sprinting the defense with ease, Martin fired a shot into the back of the net for the 2-0 lead with 17:33 left until the half.

Exactly eight minutes later, Alex Broughton added to that lead when she put one into the back of the net with 9:33 left in the first to put Briarwood up 3-0 to cap off a strong opening period of scoring.

Early in the second half, both teams were able to find great opportunities, but either missed the goal narrowly or were on the wrong end of a great save.

For 39:46 of play in the second half, it looked like the final score was going to be 3-0 in favor of Briarwood, but Sherrod was able to get one last chance.

With 14 seconds remaining, similar to the breakaway Martin had earlier in the game, Sherrod broke free up the middle of the field and out sprinted a defender before burying a goal in the back of the net after pushing it by the goalkeeper in a one-on-one situation to end the game in Briarwood’s favor by a final score of 4-0.

Playing in a three-team area with a 2-0 area record, the Lions have pretty much locked up a playoff spot and will look to use this win to build momentum heading into the postseason three weeks from now.