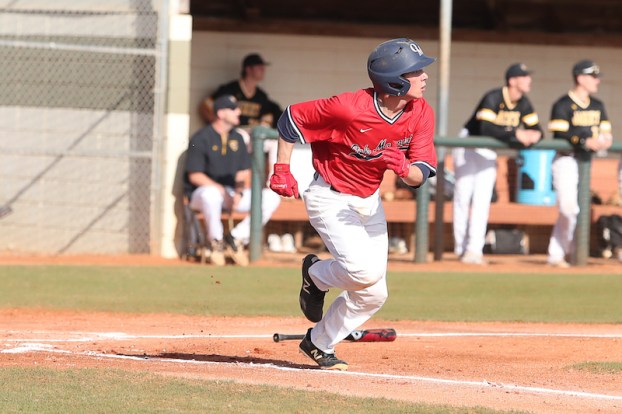 Oak Mountain found its offense in a win against Pelham picking up 15 hits and 11 runs in the 11-2 victory. (File)

NORTH SHELBY – During the 2018 Gulf Coast Classic, Oak Mountain’s offense struggled to get going in all but one of its four games as the Eagles scored three runs or fewer in those three games leading to a 2-2 record.

Returning back home on Tuesday, April 3, seemed to be a welcome sight, however, as Oak Mountain’s offense broke out with 15 hits and 11 runs to take down county foe Pelham by a final of 11-2 to pick up its 19th win of the season.

After Wesley Dennis got out of the top half of the first inning without allowing a run on the mound, the Eagles came to the plate looking to strike first.

They did that easily as the first four batters were able to reach base safely.

Dylan Fraser reached first thanks to being hit by a pitch. An error then allowed Caleb Ragland to reach base safely and move courtesy runner Luke Percer to third to put runners on the corners.

Back-to-back singles from Jackson Kimbrell and Landon Cato both drove in a run apiece to give Oak Mountain a 2-0 lead.

Ryan Reuse then hit a third single of the inning driving in two more runs to give the Eagles a 4-0 advantage at the end of the opening inning.

Pelham posted one run apiece in the second and fourth innings, but it wasn’t nearly enough for an Oak Mountain offense that went on to score one run in the third and one run in the fourth before posting its best inning of the game with a five spot in the fifth.

The Eagles outhit Pelham 15-2 in the game as Dennis and Carlton Lucas were in complete control on the mound for Oak Mountain.

Dennis tossed the first three innings of the game and allowed just two hits and two earned runs while striking out one. Lucas pitched the final four innings not allowing a hit and striking out one.

Hunter Hall finished the game 2-for-2 with two RBIs and Cato finished 2-for-3 with one RBI and two runs scored. Caleb Kennedy went 2-for-4 with a run scored as well.

Daren Ledbetter and Carter Reid had Pelham’s only two hits of the game.

Oak Mountain improved to 19-7 for the season, while the Panthers are now 13-12 overall.

By ALEC ETHEREDGE | Sports Editor PELHAM – Trailing by one run in the final inning with two runners on base... read more