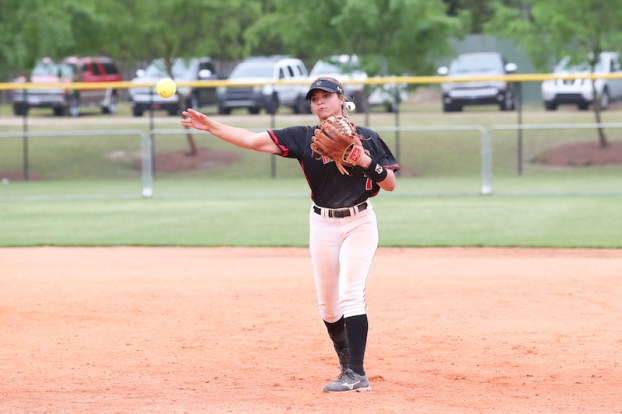 Thompson’s softball team picked up its 11th straight win as well as an area victory in a dominant 17-0 game against Vestavia Hills. (File)

VESTAVIA HILLS – As if there were any question after the dominant performance in Gulf Shores where Thompson won 10 straight games to take home the 2018 Gulf Coast Classic, the Warriors returned back to the Birmingham area on Tuesday, April 3, and put those questions to rest with a 17-0 shutout win against area foe Vestavia Hills.

The Warriors carried the momentum of that win over into their first contest after spring break and took advantage of it immediately with a 13-run first inning.

Having won the Gulf Coast Classic by outscoring opponents 73-13 during the 10 consecutive wins, it was familiar territory for Thompson against Vestavia as the Warriors took advantage of those 13 runs early to score 17 runs in the game and extend that number to 80-13 in the last 11 games.

The Warriors started the game with a single from Kindall DeRamus, a double from Lauren Haskins and a walk to Mikayla Touhey to quickly load the bases with no outs.

Without grabbing a hit in the next five at bats, Thompson drove in five runs thanks to three walks, a fielder’s choice and an error to take a 5-0 lead before an out had even been recorded.

After four more runs were driven in thanks to two singles, two walks and a sac fly, the real highlight of the inning happened to cap off the scoring in the inning.

With the bases loaded, Kennedy Foote stepped to the plate. After finding herself in an 0-2 count, Foote took the third pitch she saw and drove it deep to center field and over the wall for a grand slam to extend Thompson’s lead to 13-0.

The Warriors added to the lead in the top of the second when DeRamus scored on a Madison Bubel ground out to shortstop.

Leading 14-0 already, the Warriors put the final nail in the coffin in the top of the fourth inning with three more runs.

With one out in the inning, Haskins hit a solo shot over the center field wall to extend the lead to 15-0. That was followed by a double from Touhey and an RBI-single from Bubel to add one more run.

The final run of the game came when Foote doubled to right field to bring Allie Miller home for the Warriors’ 17th run.

In the bottom of the fourth, Bailey Whitfield was able to put the Rebels down in order to close the game out with a mercy-rule win.

Whitfield tossed a complete game in the circle in just 52 pitches only allowing one hit.

Foote led Thompson at the plate thanks to a six-RBI day after going 2-for-3. Haskings went 3-or-3 at the plate with two RBIs and two runs scored, while DeRamus was 3-for-4 with one RBI and three runs scored.

Touhey also had a multi-hit game after going 2-for-3 with one RBI and three runs scored. Bubel added three RBIs and Miller two RBIs to give Thompson four players with multiple-RBI games.

The Warriors are now 31-5 overall and 2-1 in area play with area games against Tuscaloosa County (twice) and Hoover left in the regular season.