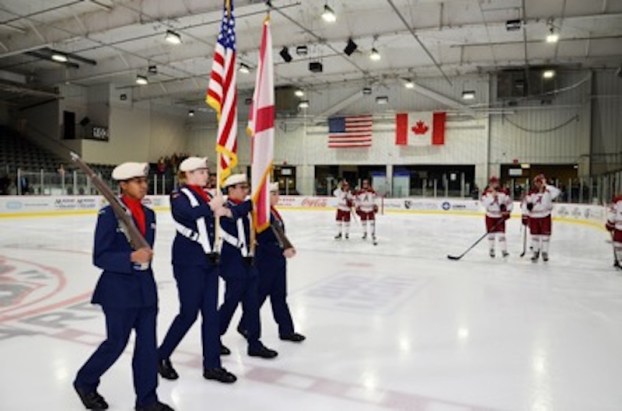 The past few months for the AF JROTC unit at Thompson High School have been full of exciting events and opportunities. On Jan. 19, the color guard presented the colors at the Pelham Civic Center Ice Hockey Game during Military Appreciation Night, hosted by American Legion Post 555. On Jan. 24, Cadet Lt. Col. Brandon Krutsch was inducted as the Second Semester Unit Commander of AL-932 and has performed extremely well leading the Air Warriors.

On Feb. 2-3, cadets joined together for a night full of pizza, cornhole, games and fun during a lock-in at the high school. To be eligible to participate, cadets were asked to bring nonperishable food items for the local food bank.

On Feb. 17, cadets attended the unit’s 24th annual military ball, and thanks to the outstanding efforts of cadets and outside support, it was once again a success. The cadets and their guests were highly appreciative of 43 local businesses for their donations such as desserts, plates and door prizes. Altogether, the value of donations accumulated $3,876. The unit thanks them for their continued support and looks forward to next year’s ball.

Through the months of December, January and February, cadets worked diligently with the instructors to prepare for the move to the new Thompson High School. The color guard members presented the colors at the Open House event on Saturday, Feb. 24. The cadets are pleased with their new classroom and leadership lab.

Staff members and extra-curricular team commanders successfully prepared for the high school’s Academy Fair on March 12. This is always a great opportunity for upcoming freshmen to receive insight on how the AF JROTC program runs.

The annual Flag Retirement Ceremony was on Saturday, March 17, and the cadets spent their day honorably retiring old flags. On March 21, AL-932’s In-House Inspection was conducted, and each flight competes for Flight of the Year. This inspection tests the knowledge, uniform and bearing aspects of the cadets. Currently, the cadets are preparing for the Bataan Death March, which is a 15-mile memorial hike in honor of World War II prisoners of war. Cadets will be soliciting donations for each mile they hike to support a local charity.

The Air Warriors will end the year with an Awards Ceremony on April 26, at which cadets will receive awards and recognition for their hard work. On Saturday, May 12, cadets will host a picnic to welcome rising freshmen into the program.