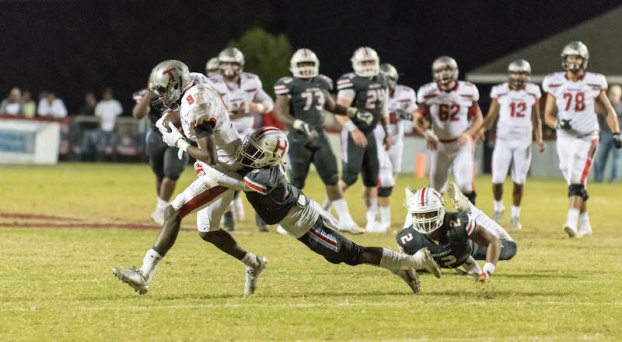 Capping off one of the most historic seasons of football in Shelby County will be eight players and one coach representing the North All-Star team in the North-South All-Star football game to be held Thursday, July 19, at Montgomery’s Cramton Bowl.

With the Warriors having one of the most historic seasons in school history, it was only fitting that they had the most players from Shelby County named to the team.

Ahmad Edwards, Myles Brown and Mackie McNeal will all represent Thompson in this year’s game.

Edwards broke a state record for most receptions in a single season with 118 and added 1,464 yards receiving as well as 13 touchdowns.

Brown has been one of the best secondary players in the county and totaled 96 tackles during his senior season, including five tackles for loss. Brown also tied with Jalen Rayam for the team lead with four interceptions.

While Spain Park didn’t make the run it wanted to this season, the Jags had plenty of talent on the field and it shows with the two players headed to the All-Star game.

D’Arie Johnson, who has been one of the county’s best running backs for several years, will be one of the two to represent the Jags, while Blake Hester, a defensive lineman, will be the other.

Johnson rushed 160 times in 2017 and posted 985 yards and 14 touchdowns, while adding 250 yards and three touchdowns receiving.

Hester totaled 60 tackles during his final season with Spain Park, while posting an impressive 10 tackles for loss and two sacks.

Oak Mountain’s Carson Bobo was also named to the team after being one of the state’s best true tight ends during his senior season.

The impressive athlete doesn’t just flash his skill on the field, after posting 612 yards and nine touchdowns receiving, but is extremely smart in the classroom and is now headed to Princeton to continue his athletic and academic career.

Another great athlete at catching the ball during the 2017 football season was none other than Helena’s Justin Stuckey, who will represent the Huskies in the game.

Stuckey finished the season with 855 receiving yards and seven touchdowns on 45 receptions. Had Helena not dealt with quarterback turnover, he could have been a 1,000-yard receiver easily.

Sticking in the 6A ranks, the Pelham Panthers will also have representation from not just one player, but their head coach as well.

Offensive lineman Will Pierce, who totaled 71 pancake blocks this season, will be joined by his head coach Tom Causey as they look to help bring the North team a win.

Those eight players as well as Causey will look to bring home a second consecutive win for the North team after a 14-13 victory last year. The South team leads the series with an overall record of 30-26-2.

By ALEC ETHEREDGE | Sports Editor  A total of four softball teams in Shelby County have stood out from the... read more