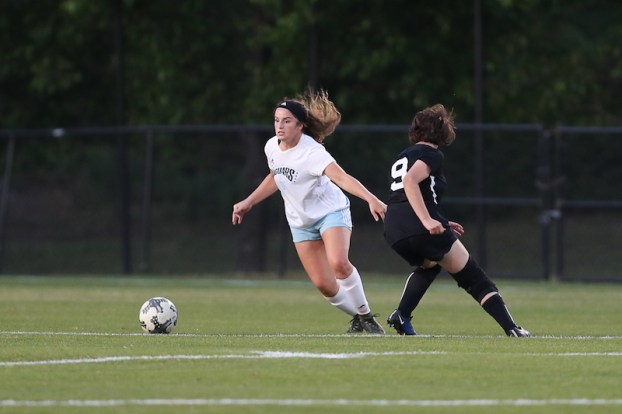 Spain Park took down Pelham in a top-10 battle thanks to adjustments made midway through the second half and stellar play from Brooks Rice. (For the Reporter/Larry Dancy)

Spain Park comes back to top Pelham in top-10 battle

HOOVER – Spain Park’s boys varsity soccer squad hosted another top 10 team on Wednesday night, April 5, and squeezed out a slim 2-1 victory against the Pelham Panthers to win its third game in a row.

The Jaguars had to play from behind to start as Pelham struck first in the 19th minute off a free kick from the outside right of the box.

The Panthers’ first attempt bounced off the left goalpost, but Irvin Rodriguez was ready with the rebound to give the Panthers their only lead of the game. Spain Park head coach Matt Hall had nothing but good things to say about Pelham after the first game back from spring break.

“Playing Pelham is exactly the type of team you want to play,” Hall said. “Really good, hard-nosed team. I know Patrick (McDonald) and his guys are always so strong and play so hard and put a lot of pressure on you.”

The goal served as a wakeup call for Spain Park, and the Jags used a similar scenario to pick up their first goal of the game.

In the 26th minute, the Jaguars were awarded a free kick of their own after Reece Eberhardt was fouled just outside of the penalty area. Brooks Rice lifted a shot that bounced around in in a scuffle near Pelham’s goal and found sophomore Logan Bradley who booted his first goal of the season into the net to tie the score at one goal apiece.

“I was proud of my guys’ character, Hall said. “We were down 1-0, and then we changed a few things up midway through the first half. We changed the formation up to give us more space in the midfield and a few more options up top.”

That space allowed Brooks Rice the room he needed for the go-ahead goal and what a goal it was.

Rice controlled the ball to the right of the box and began dribbling right to left across the top. Pelham might have forgotten he was a lefty, and the sagging defense allowed Rice to rip a shot into the upper left corner of the Panthers’ goal for the 2-1 lead.

It marked Rices’ 18th goal of the season, while he also boasts 10 assists.

The first half saw both teams being aggressive as Pelham and Spain Park took seven and eight shots, respectively.

Pelham put three of seven on goal, while the Jaguars were able to keep five of their shots on target.

The second half was a completely different story as Spain Park went conservative to protect the lead.

Pelham only got off five shots after halftime and only one of those fell between the posts.

MJ Dimbo had a great outing with five saves and often sacrificed his body to prevent further attempts by the Panthers. It was Dimbo’s third win of the season in goal.

“He likes to read the game and come out and intercept passes and stuff,” Hall said. “MJ’s just stepped up, played some big games, made some great saves for us. Really, we just have the type of team with a bunch of hard workers.”

Pelham (8-6-3) has now lost two straight, but will have a chance to redeem themselves this Friday, April 6 when they host Northridge High School at 7:30 p.m.