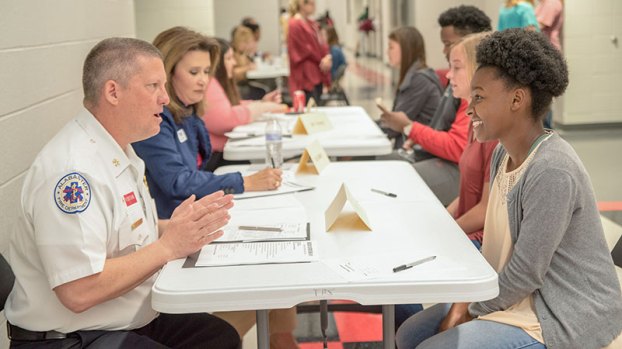 Thompson High School seniors participate in mock interview sessions with community volunteers – many of who are local business owners – at the school on April 6. (Reporter Photo/Keith McCoy)

ALABASTER – Until April 6, Thompson High School senior Jamieson Browning hadn’t experienced sitting across a table from a business owner and touting his credentials for a job opening.

But after the interview was over, he was feeling confident.

“I had not experienced that before. I think it was a positive experience, and it’s good to prepare for these situations you’ll experience later in life,” Browning said. “I think I did alright. I didn’t stutter at all.”

Browning was one of about 480 THS seniors participating in the mock job interviews, which drew about 30 volunteers ranging from police officers and firefighters to local business owners. THS Career Coach Marsha Roach said the school worked to recruit volunteers the students may one day actually interview with.

“We want to prepare our students for the future. This will help them when they are interviewing for college or interviewing for a job,” Roach said as the seniors met one-on-one with the volunteers at tables spread throughout the school’s hallways, noting she and Alabaster City Schools Career Coach Katie Cardwell worked to organize the event.

Before the interviews, students prepared their resumes, learned how to answer and ask questions during job interviews and how to dress for the occasion.

The mock interviews grew from the report card conferences the school has held for the past several years, during which community volunteers meet with students to review and provide feedback on their academic performance.

While it was the school’s first time holding mock job interviews for the entire senior class, it wasn’t the first interview experience for THS baseball player Nick Walker, who has held jobs in the area over the past few years.

“I think I did pretty good,” Walker said after his mock interview. “It definitely prepares you for the future, because you’re going to need this.”