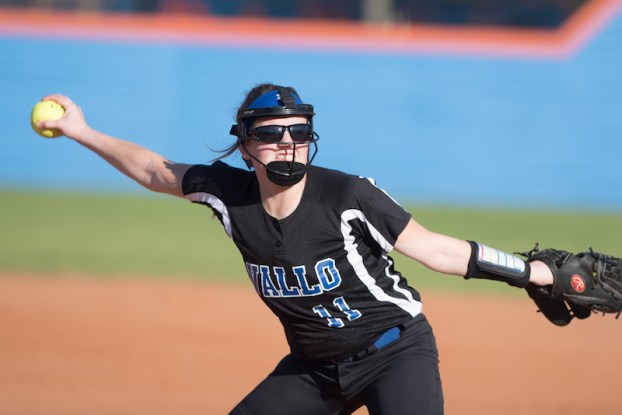 Montevallo lost a 5-0 game against area foe Prattville Christian despite a strong effort in the first six innings. (File)

Montevallo falls to Prattville in area play despite strong pitching

MONTEVALLO – Prattville took a 2-0 lead in the top of the first inning, but no more runs were allowed until the seventh, as Montevallo’s Georgia Hughes and Prattville Christian’s Landyn McAnnally locked into a pitchers’ duel, as the visiting Lions beat Montevallo 5-0 in Class 3A, Area 5 softball action.

Montevallo’s only hit on the day was a one-out double by Savannah Polk in the bottom of the first inning. Allie Tryon reached on an error to start the second inning, but was stranded.

After the error, Prattville Christian’s Landyn McAnnally retired the next 18 batters straight to complete a one-hit shutout. She struck out 12 Bulldog batters in the game, beginning with her second out of the second inning.

Prattville added three insurance runs in the top of the seventh inning when Sarah Williams and Landyn McAnnally delivered a pair of two-out singles. Madison Hanson followed with an RBI single to left and Callie McAnnally doubled to center to drive in two more. Both Hanson and Callie McAnnally finished the day hitting 2-for-4 with a combined four RBIs, three by McAnnally.

Hughes went the distance in the circle for Montevallo, allowing five runs off nine hits. She struck out three and did not walk a batter.

Montevallo (10-10, 2-1 Area 5) hosts Indian Springs and Homewood on Monday and Tuesday, respectively, before traveling to Prattville Christian on Thursday, April 12.

By ALEC ETHEREDGE | Sports Editor HOOVER – Oak Mountain and Spain Park go neck-and-neck with each other every season... read more