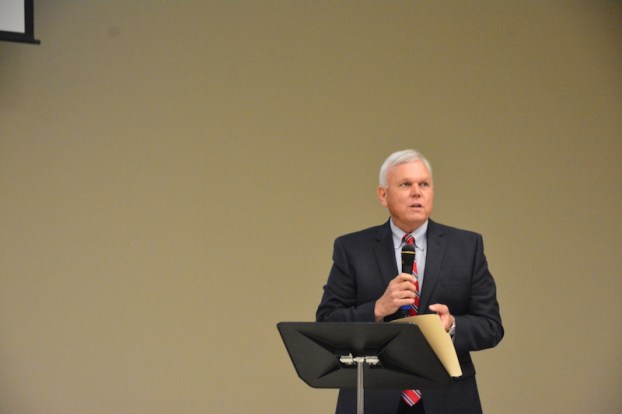 SCBOE Superintendent speaks about the current status of its 31 schools at the monthly South Shelby Chamber luncheon. (Reporter photo/Amalia Kortright)

COLUMBIANA – Members of the South Shelby Chamber of Commerce listened to Shelby County Schools Superintendent Randy Fuller give updates about the school system an honored the 2018 recipients of the chamber’s Johnny Lowe Scholarship Fund at a luncheon on Thursday, April 5 at the Columbiana United Methodist Church.

“When I came to Shelby County, I discovered it was a special place,” Fuller said at the opening of his presentation. “It’s special because we all work together. Everybody has the interest of the whole county in mind. Whether it be the citizens, commissioners or the city governments, we all work together because we all have that one goal of having Shelby County be the top county in Alabama.”

As of this year, Fuller said over 20,600 students are enrolled in the 31 schools operated by the SCBOE. Fuller said approximately 2,672 people are employed by the BOE, making it the largest employer in the county.

“We’re about the sixth or seventh largest school system in Alabama,” Fuller said.

“It is well above the state average of 89 percent. All of our schools are above 90 percent, and we’re continually growing in instruction in our school system. We’re in a great place,” Fuller said.

Fuller went over the SCBOE’s vision, mission and beliefs, which was developed over the course of several years.

“We spent a lot of time really looking at ourselves, who we are, what we believe and where we’re going,” Fuller said.

According to Fuller, the SCBOE’s vision is to be the model of excellence in education. So far, Fuller said Shelby County Schools has lived up to its vision.

“We have systems come consistently to our system in all areas to look at what we’re doing and how we’re doing it,” Fuller said.

Fuller said the BOE’s mission is to make graduate every student and prepare them for life after high school and its beliefs involve collaboration, a commitment to excellence, partnerships with the community, continuous improvement and nurturing a culture of success.

“We’re the only school system in the state that does anything like this,” Fuller said. “We meet with our board members four to six times a year in retreats, in training sessions and collaborative sessions.”

Local schools have also began utilizing the Leader in Me program and teaching from “The 7 Habits of Highly Effective People,” written by Stephen R. Covey.

The SCBOE has also started mandatory senior exit interviews, in which graduating seniors have to create a presentation on their goals and future plans. Soon, Fuller said high school freshmen will be required to make a four-year plan.

At the end of the luncheon, the graduating seniors who each received $1,000 from the Johnny Lowe Scholarship Fund were named.

Recipients of the Johnny Lowe Scholarship include: