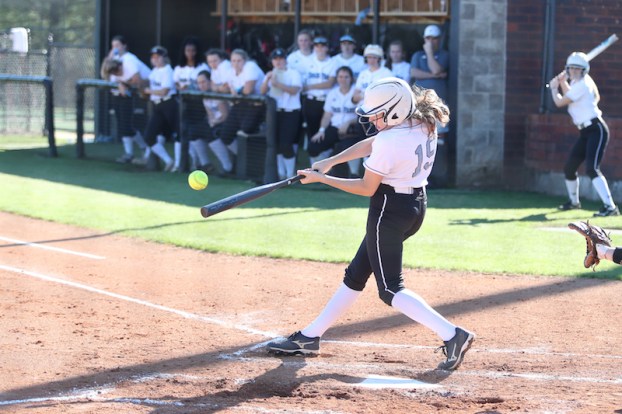 Spain Park's Lindsay Parker, above, had a dominant performance at the plate to lead Spain Park to a 3-2 area win against Oak Mountain. (For the Reporter/Dawn Harrison)

HOOVER – Oak Mountain and Spain Park go neck-and-neck with each other every season on the softball field with last year’s regular season ending in a coin toss to determine who would host the area championship.

The first area matchup of the season and second game between the two in 2018 was no different as the Jags held on for a 3-2 win against the Eagles after OMHS won a non-area matchup 5-4 earlier this season.

Spain Park (27-5, 3-0) scored a combined three runs in the first three innings to grab an early 3-0 lead, but the Jags had to stave off a comeback in the final four innings to hang on for the victory.

Trailing 3-0 in the top of the fourth, Jenna Galloway led the inning off with a single to try and get something going for the Eagles.

That single, however, was followed by two consecutive outs to leave Galloway stranded in scoring position for the time being after stealing second.

M’Kiyah Mitchell wasn’t going to let the opportunity be wasted and picked up a single of her own on a line drive to left field that allowed Galloway to cross the plate and give Oak Mountain its first run.

Spain Park threatened to extend its lead in the bottom of the fourth by loading the bases with no outs, but in a key spot, Lacey Marty was able to force a fly out and a double play to end the inning with no damage.

The Eagles used that momentum to carry some confidence into the top of the fifth inning as Torie Denkers led the inning off with a confident at bat. On the fourth pitch she saw, Denkers drove a ball deep to center field and over the wall for a lead-off home run to trim Spain Park’s lead to one run at 3-2.

Oak Mountain picked up one more single the rest of the inning, but couldn’t add another run.

After a relatively quiet sixth inning, the Eagles came back to the plate for their last chance.

Denkers led the inning off again and reached on a walk before being replaced by courtesy runner Julia Tucker. Dawn Autry then laid down a sacrifice bunt to move Tucker into scoring position with one out.

Riley Sullivan then stepped to the plate and gave the Eagles a great chance to score with a single on a pop fly to shortstop, but it was only able to advance Tucker to third base to put runners on the corners with no outs.

After Sullivan advanced to second to put two in scoring position with one out, Oak Mountain was a single away from tying or taking the lead, but Spain Park pitcher Annabelle Widra settled down and picked up a strike out and a pop out to preserve the 3-2 win.

Spain Park took its 3-0 lead thanks to two RBI singles from Lindsay Parker in the first and third innings and a passed ball in the third that allowed Widra to score.

Parker had a strong night at the plate for Spain Park going 3-for-3 with two RBIs. Four different players behind her were able to pick up one hit apiece.

Cassady Greenwood led Oak Mountain with a 2-for-3 game at the plate, while five other players had a hit. Denkers and Mitchell had the Eagles’ only two RBIs of the game.

Widra pitched a complete game for Spain Park and allowed seven hits and two earned runs while striking out eight.

Oak Mountain is now 16-9 overall and 2-1 in area play with two games against Huffman remaining and one against the Jags.