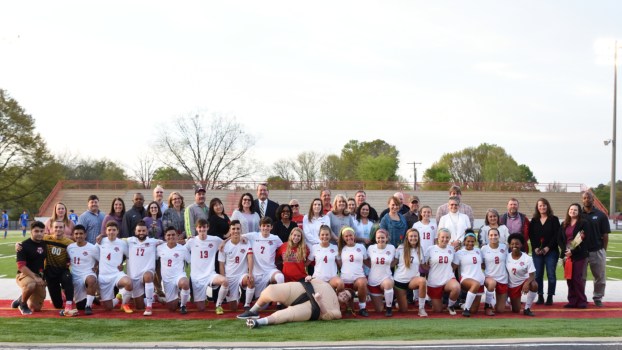 ALABASTER – Thompson’s boys soccer team is starting to garner votes for top 10 consideration in the state’s 7A classification and is on the verge of breaking into the elite with just a few games to go before the playoffs.

The Warriors certainly looked the part as they handled the visiting Wildcats of Tuscaloosa County with a mercy-rule 10-0 on senior night on Thursday, April 5.

The game was called with 24 minutes of regulation time remaining, but the Warriors did their damage in the middle 40 minutes of the game.

The Wildcats looked to be up for the challenge in the opening minutes of the game getting several shots off with a few of them on goal. However, after its second goal in the 21st minute, Thompson unleashed an avalanche of goals from a variety of angles.

The Warriors scored five goals in the last 12 minutes of the half, mostly on the fast break and crosses to the front of the net.

Thompson dominated the game in every facet and maintained its aggression on offense throughout putting up a monster 38 shots keeping 23 of them between the posts.

José Villanueva and Sy Garret scored two goals apiece, while senior forward Cole Hadley assisted on two goals and finally drew blood himself with a late goal in the second half.

Tuscaloosa County did not record a single shot in the second half, though it only lasted 15 minutes before Thompson scored another three quick goals to end the game.

Thompson puts themselves in prime position for a top 10 spot in next week’s voting, but will need to perform well to retain their prospective ranking in a road contest against area foe Vestavia Hills on Thursday, April 12, that has turned into a must win as far as making the playoffs.

By NEAL WAGNER / Managing Editor ALABASTER – For the first time in a decade, the Thompson High School... read more