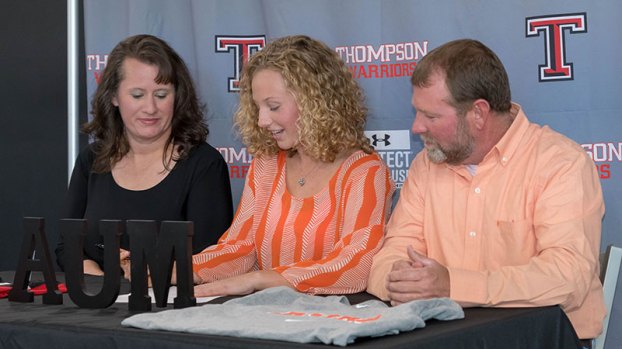 ALABASTER – For the first time in a decade, the Thompson High School soccer team will be without a member of the Poe family on its team next year.

“For 10 years we’ve had their genuine happiness and laughter, so that’s going to be something I think we will all truly miss,” THS head girls’ soccer coach Nathan Button said of Peyton Poe and her older sister during Peyton’s scholarship signing ceremony on April 6.

Althouth it will be bittersweet to see the Poe family move on from THS, Button said he looks forward to watching Peyton play at the next level next year. Surrounded by family members, friends, teammates and coaches, Peyton signed a soccer scholarship with Auburn University Montgomery in the THS cafeteria.

“Her eighth grade year, when she tried out for the team, there was no doubt she deserved to be on the team,” Button said. “From then on, she was a starter in almost every game. Even from that young, it was easy to see how talented she was.

Peyton has had a major impact on the THS program over the past five years. While she has been on the team, THS has won 65 games, won the Island Cup twice, won the Metro Tournament twice, helped Button become Metro Coach of the Year, won the area and made playoffs three times. Peyton has been named team captain, scored 26 goals and had 20 assists during her career.

“While her stats are amazing, the real thing about her is her character. She is a kind person and she has a big heart,” Button said. “I’m extremely excited that Thompson High School is sending Peyton Poe to AUM because in addition to being a great player, she’s a wonderful young woman. This is a great moment for Thompson High School, for our team, for her parents and for our coaching staff.”

Peyton said the THS community has helped her reach this point in her career.

“Thank you to my parents that have always supported me through 15 years of playing soccer, thank you to my teammates who pushed me to be a good soccer player and get me to the point where I am,” she said.

By SETH HAGAN | For the Reporter ALABASTER – The Thompson girls’ soccer team picked up a dominant win on Thursday,... read more