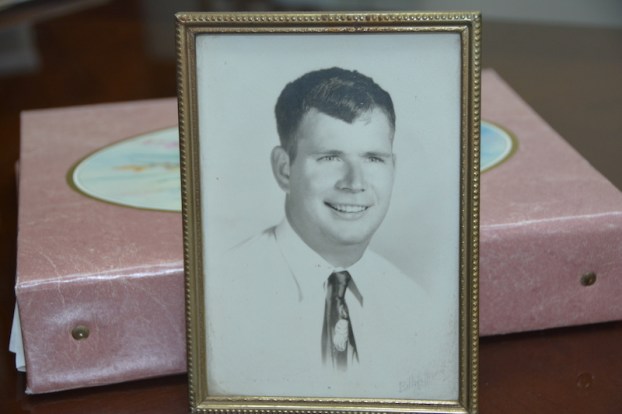 Investigators are currently searching for the remains of 46-year-old Guy Kirby of Alabaster, who disappeared in 1975 and is said to have been murdered. Kirby was a white male who had black hair and weighed around 240 pounds. (Reporter photos/Amalia Kortright)

CALERA – Despite having a decades-old case on their hands, the Shelby County Sheriff’s Office Cold Case Squad has not given up on its search for 46-year-old Olen Guy Kirby. Kirby, who was referred to as “Guy” by friends and family, went missing on March 13, 1975.

According to investigators, Kirby left home that day to work as a shoe salesman and never returned home. He was reported missing when he did not return home that night.

“It’s been 43 years, one week and one day that he’s been missing,” Investigator Ray White said during a March 21 interview.

Kirby was last seen in the area of Alabama 25 near Calera during the evening. Right before sunset, he had been spotted in Shelby in a truck with a group of people, according to investigators. All of the members of that group are now deceased.

“At this point, we feel they may have knowledge, but were maybe not directly involved in his disappearance,” White said.

He was also reportedly seen in Alabaster, close to where America’s Thrift Store now stands. His niece, Mary Ruth Furline, said he had planned on visiting a revival that had come to the area that night.

After the news of Kirby’s disappearance broke, searches were conducted, flyers were distributed, polygraph tests were given and members of the community expressed a deep concern.

Kirby’s brother-in-law said he believes the initial investigators on the case could have begun searching in a more timely manner.

“It got too cool before anything was done about it,” Mitchell said.

Investigators said they began hearing rumors that he was murdered and his body was hidden.

“Several tips came in that he was in a well. Then more tips came in about different wells,” White said. “Investigators searched numerous wells to no avail. From time to time, we still get a little information that ‘he’s in a well and he’s in such-and-such place.’ So far, we haven’t found anybody in a well.”

“I remember us taking grappling hooks and throwing them down in the wells,” said Kirby’s great-grandniece Mitzie Wheat, who was a senior in high school when her great-uncle went missing.

For Furline and Wheat, the rumors about Kirby’s disappearance have been a double-edged sword.

“I think it’s hurt the police and their investigation,” Furline said. “Why don’t (people) go to the police instead of the family?”

“It helps us not give up hope, because at least there’s the possibility that it’s true,” Wheat added. “But after so many times of being disappointed, it’s frustrating.”

As a door-to-door salesman, Kirby would often walk to different areas and accept rides when offered. According to investigators and family members, Kirby had no known enemies.

“Anybody who knew Guy knew he was a good person,” Furline said. “He worked hard and he didn’t try to offend or hurt anybody.”

Because he often carried significant amounts of cash on him, it could have been a motive if Kirby was killed.

“There’s the possibility that they tried to rob him and it got out of hand,” White said.

“Safety and security wasn’t something he would have been worried about,” Wheat said.

Furline said she believes several members of one family may have had something to do with his disappearance. On the weekend after Kirby vanished, Furline said the family took a trip out of town. Mitchell said members of that family took polygraph tests and passed.

There was also a major storm that hit the area on the night of his disappearance, according to Furline and White. Furline said Kirby was terrified of storms, and could have taken shelter in one of the boxcars of a nearby train.

“It was bad enough that he would have found some place to hide,” Furline said.

According to investigators and family, Kirby was well-known and well-liked by people around the county.

“Everybody loved him. Still, to this day, people talk about him and how kind he was,” White said.

“We went out-of-state, not physically, but on the phone. We’ve talked to a few folks, and still did not get the answers we need,” White said. “These are people who were associated with Kirby and that were around at the time. And, for lack of better words, ran with the ‘good old boy’ club.”

White said the “good old boy” club he referred to was a euphemism for a group of people that cover for each other’s crimes or wrongdoings. Sometimes, Strayer said, one person will commit a crime and the friends or associates who witnessed or know about it will choose to stay silent.

“With time, relationships change. Threats, or perceived threats, from people are no longer present and more people will talk,” Strayer said. “Anytime you have a group, you have your alpha leaders. They tend to do things or direct people to do things and people are afraid of them, so they won’t talk. It happens all the time.”

Furline said her family’s search for answers also led her outside of state lines.

“My husband and I had heard about a man in Georgia that walked like Guy did,” Furline said. “Someone told me they were in Georgia and they saw somebody who matched the description of Guy.”

After they drove around the area and spotted the man, they discovered it wasn’t Kirby.

White said the case has haunted many people, and referred to his and other investigators’ dedication to the case as “Kirby fever.” He said the term was coined by an SCSO sergeant to express how much they want this case resolved.

“Once you grab ahold of this case, it’s hard to give it up. You want to keep trying,” White said.

During his childhood, Kirby contracted polio and walked with a slight limp. He may have also had a slight mental handicap.

“It wasn’t so bad of a mental handicap that he couldn’t keep track of all that stuff like accounts and orders,” said investigator Larry Strayer.

“He was very strong, and in fairly good physical shape, other than his walk and his speech,” White said.

Kirby was one of the youngest of 14 brothers and sisters. He was living in Siluria, which is now considered a part of Alabaster, at the time of his disappearance. He was single and did not have any children.

Despite the fact that he was never legally pronounced dead, Kirby’s family members placed a grave marker on his family’s plot at the Elliottsville Cemetery in Alabaster to memorialize him. Furline said his disappearance has plagued the family for generations. 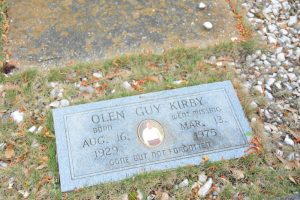 Kirby’s family installed a grave marker in the Elliottsville Cemetery in Alabaster to memorialize him after his disappearance.

“Not knowing, it hurts,” Furline said. “This is a part of you that’s gone. I would like to have some peace before I pass on.”

Furline and Wheat said members of their family are not strangers to tragedy. In 1991, Furline’s daughter, Patricia Collum, was found murdered in her home on the Chilton County side of Calera. As with Kirby, her case is currently unsolved. The two cases are not believed to be related.

So far, White said investigators believe they are getting closer to solving the case.

“It’s like a puzzle. We have the big puzzle, and we have most of the parts to that puzzle,” White said. “We’re missing four or five good pieces, and that’s what we need right now.”

A $500 reward for information regarding the case was offered by the Alabama State Governor’s Office shortly after Kirby’s disappearance. White said the offer likely still stands.

Anyone who has any knowledge of the circumstances behind Kirby’s disappearance or knows of his current location is strongly encouraged by investigators to call the SCSO’s direct line at 669-4181, its secret witness line at 669-9116 or to submit an anonymous tip at Shelbyso.com. White said people could also call his desk at the SCSO at 670-6026.

“We need that person or persons who have information on where Kirby’s remains are. People have talked, and they talk to one another. I strongly believe somebody is sitting on information, but they’re afraid to come forth,” White said. “Anyone that can provide just a little bit of knowledge, even if they think it’s not worth anything, let us know. We’ll take it and see what we can develop with it. That’s what we do.”

By NEAL WAGNER / Managing Editor ALABASTER – For the first time in a decade, the Thompson High School... read more