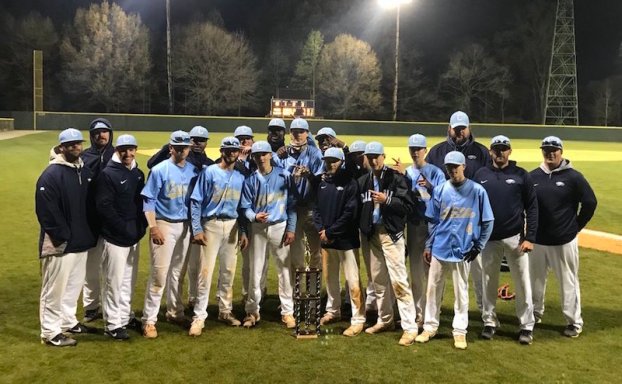 The Calera Eagles won the 25th annual USA Classic thanks to a 5-0 record against some of the best teams from around the Southeast. (Contributed)

MILLINGTON, Tenn. – Calera’s Chris McGibboney fired a perfectly curved ball that was just out of reach of the outstretched bat of a St. Johns High School batter to close out the championship game of the USA Baseball Classic with a 7-4 win for the Eagles on Saturday, April 7.

In a tournament that featured several of the best teams from four different states, as well as Washington D.C., Calera went 5-0 to win the championship at the 25th annual classic in Millington, Tennessee.

In the semifinals, Calera took down Christian Brothers High School, who has won seven state championships in the last 17 high school baseball seasons.

Trailing 8-1 in the semifinal matchup, it looked as if the Eagles’ run in the highly competitive tournament was going to come up just short, but in the fifth inning, they gathered some steam and never looked back.

A leadoff walk to Austin McKinney sparked the comeback effort in the top half of the fifth. An error and a sacrifice bunt followed to load the bases with no outs in the inning.

Tyler O’Clair then stepped to the plate and hit a fly ball deep enough to left field that allowed McKinney to tag up and score for the Eagles’ second run of the game.

Graham Blankenship followed with another play that ended in an out, but also scored a run. After Kevin Dowdell advanced to third on a wild pitch, Blankenship grounded out to third base, but Dowdell was able to take advantage and score.

Still though, the Eagles were down 8-3 and now had two outs in the inning.

Calera, however, didn’t panic and patience at the plate became a virtue. Without picking up a hit the rest of the inning, Calera strung together four walks, a hit batter and an error to drive in four more runs and cut Christian Brothers’ lead to one run at the end of the inning.

The Eagles weren’t done either. After getting three outs in four batters defensively, they came right back to the plate on a mission in the top of the sixth.

An error allowed O’Clair to reach base as the leadoff hitter, which sparked the offense yet again.

Once O’Clair was aboard, Calera roped together three consecutive singles from Blankenship, Christian Hall and QuinDarius Crews. The latter of which from Crews was an RBI-single to center field that allowed O’Clair to cross the plate for the game-tying run, as the Eagles had erased the seven-run deficit in less than two innings.

With the bases still loaded, Christian Brothers picked up two consecutive outs and looked like it was going to get out of the inning in a tie game.

McKinney and Dowdell had different ideas. McKinney laced a hard ground ball toward shortstop that turned into a single and drove in the go-ahead run, before Dowdell was able to draw a bases-loaded walk to drive in Calera’s 10th and final run of the game.

Also helping spark the comeback effort was the pitching of John Ellison, McKinney and Crews, who tossed the final three innings and gave up one unearned run and one hit to keep Christian Brothers from extending its lead or pulling off a similar comeback of its own late.

O’Clair’s two RBIs at the plate led the way for the Eagles, who had punched their ticket to the championship game.

Calera seemed to find itself offensively in the fifth and sixth innings against Christian Brothers and it led to a monumental load of confidence the Eagles were able to carry into the championship game against St. John’s College High School from Washington D.C. just a short 30 minutes later.

Right off the bat, Calera showed its confidence when Christian Hall laced a three-run home run to put the Eagles on top 3-0 quickly.

While that was all of the first-inning damage, it didn’t take long for the lead to be extended as O’Clair built off of his two-RBI game in the semis and ripped a three-run double in the second inning to give Calera a 6-0 advantage after two innings.

The Eagles knew all too well that lead wasn’t safe after pulling off a similar comeback the game before.

St. John’s finally found something to work with in the fourth inning when an infield error and an infield hit both drove in two runs to cut Calera’s lead to 6-2.

After a quiet fifth inning, Calera added to its lead in the sixth when Dowdell picked up an RBI-single to put the Eagles on top 7-2.

In the bottom half of the inning, however, St. John’s had a strong answer. An RBI bases-loaded walk and an RBI groundout led to two runs crossing the plate to trim the deficit to just three runs at 7-4.

Calera didn’t add anything to its lead in the top of the final inning, but the Eagles had the cushion they needed as McGibboney punched out the final three batters of the game with ease to sew up the championship win.

The Eagles, now 19-5 (2-0), have now shown they can compete with some of the best teams from around the southeast with the title, making them a legitimate threat for a Class 5A championship in the state.

By SETH HAGAN | For the Reporter ALABASTER – Thompson’s boys soccer team is starting to garner votes for top... read more