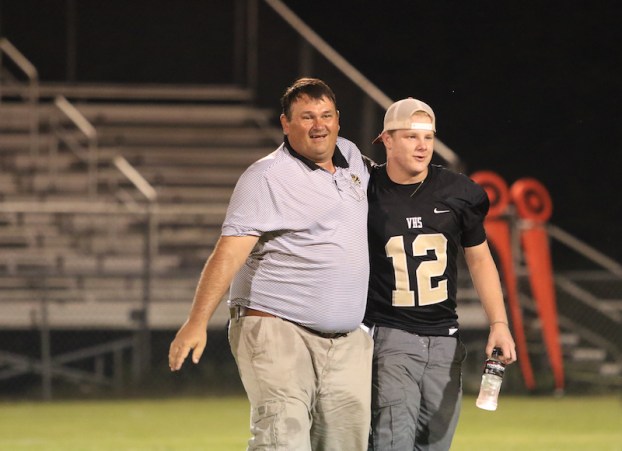 Vincent head football coach Wiley McKeller has decided to step down from his position. He will remain at the school through the remainder of the school year. (File)

VINCENT – When Wiley McKeller left Calera High School at the end of the 2015 football season to join the Vincent Yellow Jackets as their newest head coach, he was leaving behind a team that was 7-3 for a team that was 0-10 during the 2015 season alone and 4-17 during a two-year span.

McKeller, however, wasn’t scared of transitioning from a school where he had posted a record of 39-17 to a program that was in need of a complete rebuild.

“When I took this job, everyone associated with the system knew it was a massive undertaking,” McKeller said. “There was so much that needed to happen and it had to do with perception, safety and culture and nothing to do with X’s and O’s.”

McKeller didn’t just succeed. In two years, he completely turned the program from a winless team to a team battling for a playoff spot in 2017.

After his successful two-year run, McKeller has decided to step down from his post of head coach.

While he is staying at the school for the time being to remain a teacher and the school’s golf coach, McKeller is transitioning into a new phase of his life where it is believed he will be coaching at a different school in the state come the fall—a step in his life that is well deserved.

“My family and I are excited for the next chapter in our lives,” McKeller said. “I want to thank Dr. (Michele) Edwards for the opportunity to make a difference here at Vincent. We wish the Vincent community and Shelby County Schools nothing but the best moving forward.”

Wherever McKeller ends up in 2018, it will be a welcome sight for the team that lands him, which is expected to be a top program.

During the 2015 season, Vincent was shut out in six of its 10 games, scored seven or less in three of the games the Jackets actually scored points in and had a season high of 20 points in their first game of the year.

McKeller completely turned that storyline around in one year. In his first game, the Yellow Jackets were shut out. In his second, they scored six points. The rest of the season, McKeller got his offense to score at least 13 points or more in every game and scored 20-plus points in four games and had a season-high of 39 points in their final game of the season.

Year two was no different when it came to the upward trend.

McKeller and the Yellow Jackets won their opening game with a 14-13 win against Pleasant Valley. They then lost two in a row to two of the state’s best 2A teams, LaFayette and Lanett, but Vincent followed that up with four consecutive wins after that.

Vincent lost its last three games of the season, but had the Jackets pulled off a win in one of the three, they would have been a playoff team in just McKeller’s second season.

“In the two years I have been here, we completed 12 improvement projects related to perception, safety and culture,” he said. “Internally, we developed a set of team core values that emphasized hard work and accountability.

“As a result, we have been able to get the program moving back in the right direction on the field. I expect that positive direction to continue for whoever gets the job next.”

While McKeller is making his exit from coaching in Shelby County after five years at Calera and two years at Vincent, his impact at both will live on and his impact on football in the state will start to be acknowledged.