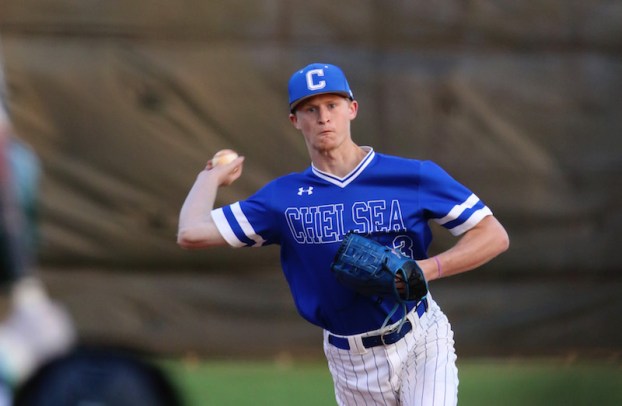 Chelsea's Brendon Case delivers a pitch during the game. He went the distance and allowed no runs and just three hits while striking out seven batters. (For the Reporter/Cari Dean)

PELHAM – Brendon Case knew that Chelsea had a chance to lock up a playoff spot when he took to the mound on Monday, April 9, to square off against area foe Pelham.

Knowing he could have more of an affect than anyone on the game by not giving up a run, Case went out and in stellar fashion tossed a complete-game shutout to lead the Hornets to a 3-0 win against the Panthers, which led to a playoff berth.

Case allowed just three hits and one walk on 94 pitches and struck out seven batters. A total of 61 of his pitches found the strike zone.

The difference came against Helena as Chelsea split a series with the Huskies and Pelham was swept.

The Hornets not only got strong pitching on the mound from Case, but the offense was able to drive in an early run to give him some support.

It all started when Will Hayes led the game off with single on a line drive to center field to put the first batter of the game on base. A sacrifice bunt from Clay DeWeese quickly moved Hayes into scoring position, but a strike out one batter later put two down in the inning.

Will Peacock, however, stepped to the plate and wasted no time taking advantage of the runner in scoring position as he lined the first pitch he saw to center field for an RBI single to score Hayes for a 1-0 Chelsea lead at the end of the first inning.

The next few innings went by quietly for both squads, but Chelsea got the next opportunity in the top of the fourth and capitalized again.

Carter Frederick used a one-out double to spark the inning for the Hornets. After a strike out put two down, Chelsea came through with its second two-out run of the game when William Sullivan hit a hard ground ball to center field that allowed Frederick to come around and score the Hornets’ second run of the game.

Trailing 2-0, Pelham got one of its best chances of the game in the bottom half of the inning when Will Pierce was hit by a pitch and Hunter Stowe singled to put runners on first and second with one out.

Case, however, was able to get out of the inning without allowing a run thanks to a fly out and a strike out. 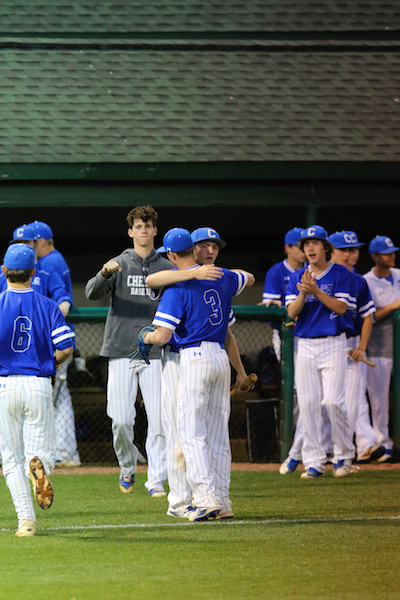 Chelsea players embrace Case after his strong performance on the mound.

Chelsea added its final run of the game in the top of the fifth, again with two outs, when Hayes scored on an error by the catcher.

Pelham put runners in scoring position in both the sixth and seventh innings, but Case was able to work out of every jam he found himself in to pick up the win.

Hayes led Chelsea at the plate going 2-for-3 and scoring two of the Hornets’ three runs. Peacock also went 2-for-3 and picked up an RBI, while Sullivan went 1-for-2 with an RBI as well.

Mitchell Rottier, Pierce and Stowe each picked up a hit for Pelham, while Kasey Clark also gave a strong effort on the mound. Clark tossed a complete game and gave up two earned runs and eight hits while striking out eight as well.

By SETH HAGAN | For the Reporter ALABASTER – The Thompson girls’ varsity soccer team squared off with the No.... read more