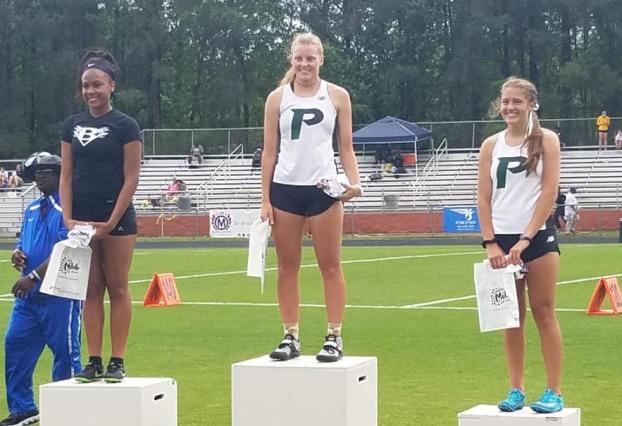 MOBILE – Pelham and Thompson have proven throughout the 2017-18 school year that their outdoor track and field teams have what it takes to compete for a state championship following an impressive cross country season and indoor track and field season.

With just over two weeks until section meets start, both got a chance to compete in a state-championship level competition during the Mobile Challenge of Champions hosted by UMS-Wright April 6-7.

Pelham ended the event with four top-10 finishes highlighted by the Long sisters, while Thompson finished the meet with six top-10 finishes and seven top-11 finishes with the highlight being a second-place finish from McKenzie Hogue.

Pelham was led by Emorie Long, who was the only first-place finisher between the two schools at the event. She finished atop the podium in the javelin throw with a distance of 130 feet, 11 inches.

Sister Erin Long wasn’t far behind in third with a distance of 114 feet, 10 inches to place them both in the top three. The Panthers’ next highest finish came from Katie Strozier, who took third place in the 800-meter run with a time of 2:17.

As has been the case all year, McKenzie Hogue led Thompson with her finish of second in the girls’ 2-mile run. She finished with a time of 11:01.71, which was five seconds behind Auburn’s Samantha Rogers.

Zoria Miller had a strong showing in the girls’ shot put with a distance of 35 feet, 6.75 inches, which was good enough for sixth.

Brandon DeMarcus Lee and Jace Jones have been two of the best boys runners all season and it showed in this event as well.