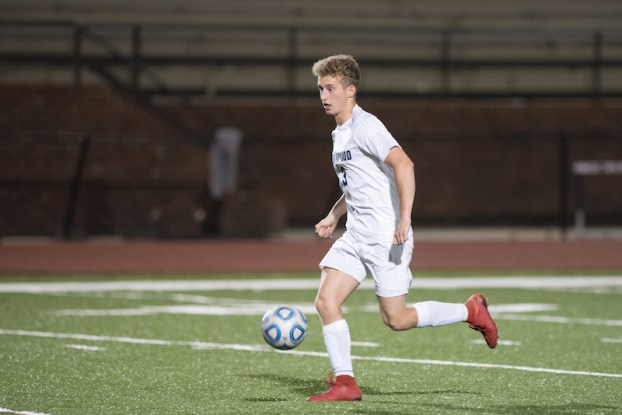 Briarwood continued to be the highest ranked team in the county and in the 4A-5A classification, as the Lions came in at No. 1 in the latest soccer poll. (Reporter photo/Keith McCoy)

With most soccer teams having three weeks of regular-season competition left, it’s time to be clicking on all cylinders and gathering momentum heading into the postseason and for 13 Shelby County teams that’s the case after finding a spot in the latest Eurosportscoreboard.com Coaches Poll.

Between all of the county’s boys and girls soccer teams, 10 were ranked inside the top 10 while three others were just outside of the top 10 as all look to bring home a state championship in May.

Starting in Class 7A, all three teams remained inside the top 13, while Oak Mountain and Spain Park each found a spot inside the top eight in the boys standings and the top four in the girls standings.

Spain Park’s girls continue to be the highest ranked team in the 7A classification after coming in at No. 3 in the standings with a record of 12-4 overall.

The Jags are 2-0 in area play, but have important games against, Oak Mountain, Mountain Brook and Huffman left.

Just behind them in the girls standings was Oak Mountain, who came in at No. 4 with a record of 10-5-3. The Eagles are already 3-1 in area play, but have two road games against Spain Park and Mountain Brook that will likely determine their playoff fate.

Thompson’s boys and girls were ranked 12th and 13th, respectively, in the classification. The boys are 10-7-1 this season and 2-2 in area play with key road games against Vestavia Hills and Hoover remaining.

The girls, however, are 2-1 in area play with a victory against Hoover and will look to lock up a playoff spot by taking down the Bucs on Friday, April 13.

In Class 6A, both Pelham teams as well as both Chelsea teams found a spot in the rankings.

The Hornets grabbed the highest spot of the three with a ranking of No. 4 in the girls standings.

Chelsea’s girls are 10-1-2 overall and have already locked up the area championship and a spot in the playoffs.

The boys jumped back into the standings at No. 10 after strong play as of late. Sitting at 2-0 in area play after an upset of Pelham, the Hornets would have to lose to both Helena and Pelham to miss out on the playoffs.

The Panthers (10-6-3, 1-1) came in at No. 5 in the boys standings and still have business to take care of with area games against Chelsea and Helena still left.

Pelham’s girls are also in the midst of a much improved season and are No. 11 in the latest rankings. Sitting at 12-3 overall and 1-2 in area play, the Panthers have an important area game against Helena on April 19 to make the postseason.

Briarwood is the only 5A team ranked in the latest standings, and the Lions aren’t just ranked, but are the highest ranked team in the county at No. 1.

Now sitting at 15-2-1 overall and 5-0 in area play, Briarwood has clinched the area championship and a playoff spot. The Lions have also won 13 games in a row.

Indian Springs and Westminster at Oak Mountain also continued their strong streaks of remaining in the 1A-3A top 10.

Westminster’s girls are 9-1-1 overall and earned a ranking of No. 3 in the standings with work still ahead of a playoff berth.

Indian Springs’ boys and girls both came in at No. 4 in the standings. The boys, who are looking to repeat as state champions, are 11-4-2 overall, and the girls are 7-4 overall.

Most teams have just a handful of games left and a couple of area games to determine what their postseason fate will be in the next three weeks.

By ALEC ETHEREDGE | Sports Editor  It’s been an up and down year for several of the county’s best girls... read more