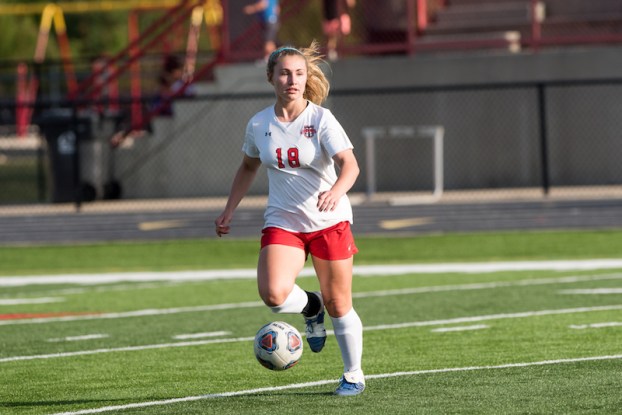 ALABASTER – The Thompson girls’ varsity soccer team squared off with the No. 1 team in Class 6A on Monday, April 9, and rose to the occasion.

Due to strong determination, and a whole lot of defense, the Warriors were able to battle to a 1-1 tie with the John Carroll Catholic Cavaliers, but the feeling in the stands was one of victory, as Thompson kept its momentum going at home after a relentless 6-0 shutout of Tuscaloosa county last week.

The Warriors didn’t allow a shot on goal until 13 minutes into the match which was indicative of the game as a whole. Throughout the contest, Thompson limited the Cavaliers’ chances at the net.

The Warriors’ lone defensive breakdown came 33 minutes into the game when the Cavs drew first blood with a goal just past the outstretched hands of Chloe Sims and into the left corner of the net for a 1-0 lead.

That lead didn’t last long, however, as senior striker Melanie Brannon weaved her way behind the Cavalier defense chasing down a long pass for a one-on-one opportunity against the goalkeeper.

Brannon didn’t hesitate and rifled a shot into the upper right corner of the net to even the match.

While Sims gave up the first goal of the game, she buckled down after the Warriors were able to notch the equalizer and held John Carroll (13-3-1) to its lowest point total of the season making several key saves including a one-on-one save in the second half and another situation where she fell on the ball just as it touched the goal line on a corner-kick rebound.

Overall, Thompson held the Cavaliers to just 12 total shots with seven of those coming on goal. Sims finished with six saves in the game.

The Warriors had their chances to take the lead in the second half, but both teams defenses hunkered down as the game turned into a stalemate.

THS took 11 shots but were only able to get four of them on goal with several just missing to the right or left of the goal post. Thompson’s defensive line deserves a lot of credit as well, as it disrupted the Cavs’ passing lanes time and again.

Even with a hard push in the second half, John Carroll never established a rhythm as drive after drive was disrupted by the Warriors’ defensive backs.

Thompson is now 10-7-2 overall and will seek head coach Nathan Button’s 200th career win in their next match as they host area opponent and No. 5 ranked Hoover on Friday, April 13 at 7 p.m.