Venomous or not: Which snakes can be found in your back yard? 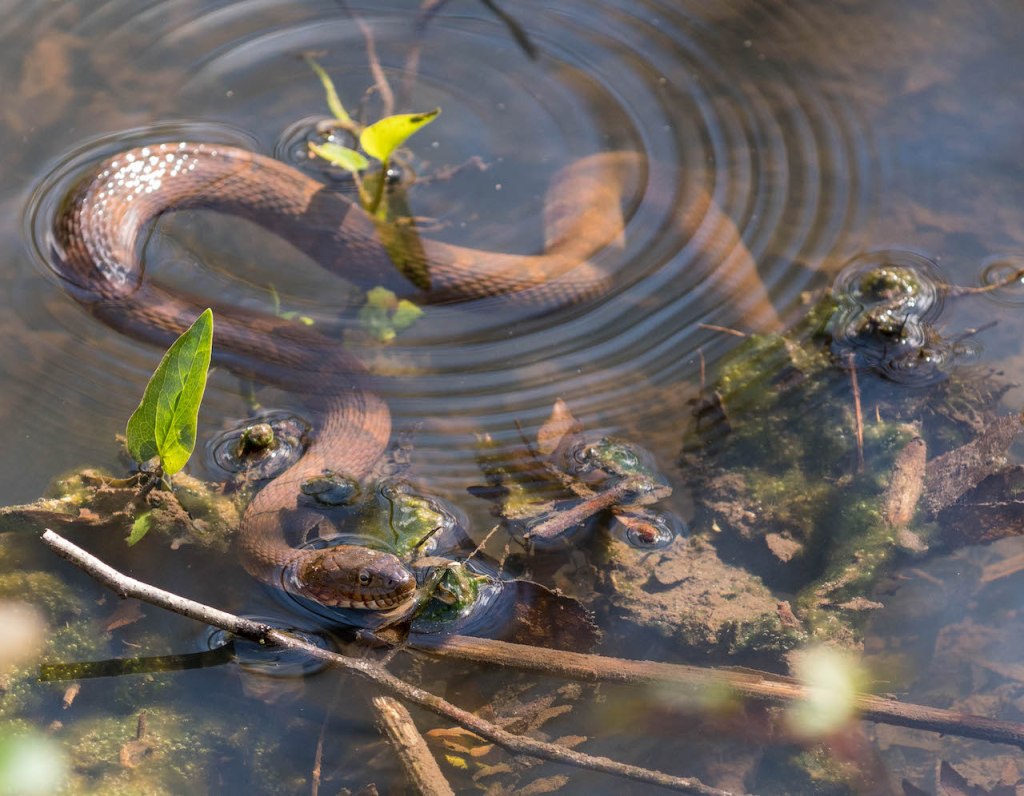 With spring and summertime in Alabama comes countless opportunities for fun in the sun, but while enjoying the sunny weather residents should always be aware of their surroundings.

Especially since the arrival of hot weather means the chances of encountering snakes are high. Of the 67 snakes found in Alabama, six of them are venomous, said Doug Adair, executive director of the Alabama Wildlife Center.

“I’m not a snake expert but we do see snakes and have some experience with them,” Adair said. “The AWC’s focus is birds but we occasionally get calls about snakes.”

Being located at Oak Mountain State Park, a nearly 10,000-acre park, Adair said AWC staff and volunteers are well-trained and knowledgeable about the snakes they might encounter. Adair said residents often call the AWC’s wildlife help line for advice on how to address wildlife issues and concerns.

“The snakes that we do encounter at the AWC are usually in the vicinity of the Treetop Nature Trail,” he said. “The best way to deal with a snake is just to leave it alone. Just enjoy its beauty and give it a wide berth. The majority of bites occur when the victim is engaging the snake.”

“There are many different species of snakes found in Shelby County,” Adair said. “The vast majority of the are not venomous and they’re all beneficial and have a place in our ecosystem.”

The feeding habits of snakes act as a natural form of pest control, Adair said. Small snakes tend to feed on harmful and unwanted bugs and insects. Larger snakes eat mice, rats and other small mammals that can destroy crops or damage personal property.

But because some snakes may blend in with their environment, humans may be disturbing a snake without being aware of it.

To deter snakes from entering yards and personal property, first, get rid of any piles of wood or standing water on the property, according to the Centers for Disease Control and Prevention. Also try to get rid of yard insects and rodents. Keep in mind that snakes are looking for either a place to live or a food source, and residents want to make sure their yard isn’t a place for either.

The CDC offers tips on how to avoid being bitten by snakes. The CDC warns that no one should ever try to handle any snake.

-Staying away from tall grass and piles of leaves when possible.
-Avoid climbing on or lifting rocks, piles of wood or other places where a snake may be hiding.
-Be aware that snakes tend to be active at night and in warm weather.
-Wear boots and long pants when working outdoors.
-Wear leather gloves when gardening or handling brush and debris.

If bitten, seek medical attention as soon as possible, but do not try to trap or capture the snake. Try to remember the color and shape of the snake, which can help with treatment of the snake bite, according to the CDC.

Those who can’t get to a hospital right away should lay down or sit with the bite below the level of the heart, wash the bite with soap and water and cover it with a clean, dry cloth or dressing. If the snake is venomous, remaining calm and still can slow down the spread of venom.

Tips on how to distinguish poisonous and nonpoisonous snakes:

Venomous
-Five of the six venomous snake species in Alabama are in the pit viper group. This includes the eastern diamondback rattlesnake, timber rattlesnake, pygmy rattlesnake, copperhead and cottonmouth.
-Pit vipers get their name from the presence of pits on both sides of the face between the eye and nostril.
-Pit vipers have vertical or “cat-like” pupils, thin necks and heavy bodies.
-All pit vipers have wide, triangular heads, however some nonvenomous snakes share this characteristic.
-Pit vipers are also characterized by having retractable, hollow fangs near the front of the mouth.
-The sixth type of venomous snake, the coral snake, is fairly small, has a black snout and black, red and yellow rings around its body. Unlike the pit viper, the coral snake has a small head, round pupils and a slender body.

If bitten by a poisonous snake do not do any of the following:

More information about snakes can be found at Aces.edu/pubs/docs/A/ANR-1308/index2.tmpl or Cdc.gov/niosh/topics/snakes/resources.html.