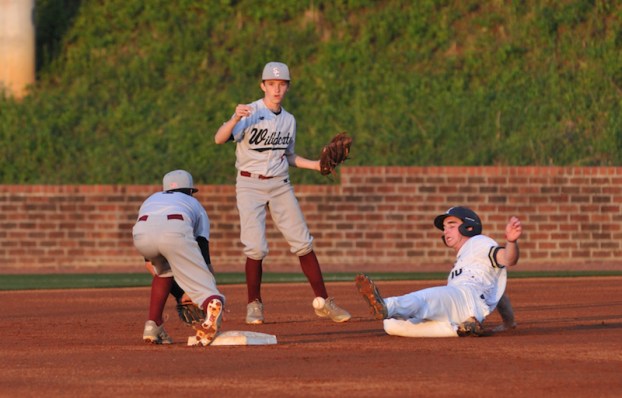 Heading into two area games with Spain Park, Oak Mountain was looking for a momentum-win against defending 6A state champ Helena on Tuesday night and got it thanks to three pitchers limiting the Huskies to one run, which led to a 5-1 victory for the Eagles.

Wesley Dennis, Carlton Lucas and Kade Sanders combined to toss the seven innings on the mound and allowed just four hits and one unearned run while striking out four.

Hurst finished the game 2-for-3 at the plate with two RBIs, while Cato also had two hits and one RBI. Five other Oak Mountain players had a hit.

Oak Mountain is now 21-8 on the season with important area games upcoming, while the Huskies have already clinched a playoff spot and sit at 16-12 overall.

Sitting at 0-2 in area play with two area series left, Thompson needed a big win against area opponent Tuscaloosa County on Tuesday night and narrowly hung on to get the job done.

Up 9-3 heading to the bottom of the last inning, the Warriors looked poised for the win, but Tuscaloosa County scored five runs to get within a run of tying the game, but Andrew South was able to get the final out on a ground out to Myles Brown to leave the tying run stranded at second.

Sam Pearce got the start on the mound and picked up the win after a solid outing. He tried for the complete game, but had to be pulled after fatigue set in and the Wildcats started making a comeback. He allowed 12 hits and five earned runs while striking out nine.

At the plate, Brown, J.C. Parker, Sawyer Pate and Breydon Edmondson all had two hits, while Edmondson had a game-high four RBIs. Pate ended the night with two RBIs.

It was a big win for the Warriors, who are now 18-16 overall and 1-2 in area play. With Vestavia beating Hoover on the same night, the Bucs fell to 2-1 and the Rebels moved to 3-0 in area play, which means Thompson will most likely have to win its last three area games to make the playoffs with one left against Tuscaloosa County and two against Vestavia Hills.

Briarwood went into its game against county and area foe Shelby County with a chance to lock up the 2018 area championship and didn’t let the opportunity slip away as the Lions scored eight combined runs in the first two innings and then seven combined runs in the third and fourth innings to take down the Wildcats 15-0.

On the mound, Jonah Carroll, Hudson Hartsfield and Andrew Ponder combined their efforts to complete the five-inning shutout as they allowed just one hit and struck out five. Carroll ended the game as the winning pitcher after tossing the first three innings.

Hartsfield led the way at the plate going 3-for-3 with two RBIs and three runs scored, while Parker Scott was 2-for-4 with two RBIs as well. Michael Hiers also continued his hot stretch offensively and went 2-for-3 with a game-high four RBIs thanks to two doubles, while Wesley Helms added three RBIs.

Evangel had lost its last three games in a row coming into Tuesday, but rebounded with an 11-0 shutout of Lyman-Ward Military Academy on Tuesday.

With less than a month before hosting the ACSC state championships, the Lightning are looking to finish the regular season with momentum and got it in a big way against Lyman-Ward.

Evangel scored in all four innings of the shortened mercy-rule win, including four combined runs in the first three innings and an explosive seven runs in the bottom of the fourth to seal the 11-0 victory.

Chase Jones had a strong game offensively for Evangel as he finished the game 2-for-2 with a game-high two RBIs. Weston Akin, Brandon Hines, Dawson Humphries, Seth Harrison, Justin Humphries and Jay Underwood all had one hit in the game.

Hines, Harrison and Justin Humphries added the other RBIs for the Lightning.

While Jones was impressive at the plate, he was almost more impressive on the mound. He picked up the complete-game win after allowing just one hit and seven strikeouts.

By SETH HAGAN | For the Reporter ALABASTER – The Thompson girls’ varsity soccer team squared off with the No.... read more