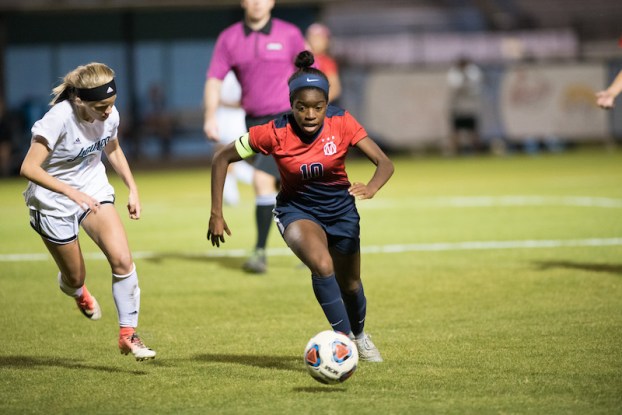 Oak Mountain not only picked up a PK win against area foe Spain Park, but gave head coach Chris Blight his 100th career win the same day as the birth of his second child. (Reporter photo/Keith McCoy)

HOOVER – It was a game someone had to lose, but the players needed all but two penalty kicks to determine who that would be when Oak Mountain traveled to Spain Park for a top-five matchup in Class 7A with full control of Area 6 hanging in the balance.

The Eagles prevailed scoring four penalty kicks to the Jaguars’ two after the double-overtime game ended in a 3-3 tie.

Oak Mountain (11-5-3) took the fight to the hosts in the first half controlling the ball most of the period and was particularly impressive in tight space against the Spain Park defense.

The Eagles passing was crisp and it led to many opportunities for their offense. To show Oak Mountain’s dominance early, the Eagles outshot the Jags an emphatic 18-5 in the first half putting 12 of those shots on goal and keeping Jaguar goalie Vivian Gray busy all night.

The defense on the other hand was just as sharp stealing passes and forcing the ball back into Spain Park territory.

The Eagles broke the ice 26 minutes into the game off a corner kick, as sophomore Danielle Retief pounced on the far side of the goal heading the ball into the right side of the net for the 1-0 lead.

While Oak Mountain struck first and Spain Park was struggling, the Jags weren’t going to go down quietly in the important are contest.

Up to that point, the Jaguars had only put one shot on goal in the entire half, but junior Haley Greene changed that six minutes later as she launched an improbable shot from 35 yards out arching just over the outstretched hands of Oak Mountain’s Emi Philpott to tie the game at 1-1 just before the half.

The Jags used that shift in momentum to carry their effort into the second half as Kayleigh Rice caught a high rebound right in front of the Eagles’ goal to give Spain Park their first lead of the game at 2-1 just four minutes into the period.

The goal seemed to spark Oak Mountain back into its first half form, however, who had only scored one goal despite 20 shots to that point.

“We started to get a bit frustrated with the ball not going in,” Blight said. “We had so many chances and let that frustration get the better of us, but we regrouped, came out hard in the second half and played really, really well.”

The Eagles weren’t down long as senior Hailey Whitaker scored the first of her three goals in the 46th minute of the game, as she lifted a beautiful shot 30 yards out from just above of the left side of the box that sailed below the center of the cross bar to tie the game at 2-2.

Whitaker had suddenly found some momentum and scored again less than 20 minutes later to give the Eagles their second lead of the game at 3-2.

“Hailey’s a huge talent, she brings so much not just with her play but her leadership,” Blight said. “She’s so good on the ball and works harder than anyone else. She dug us out of a hole a couple of times tonight and that’s what leaders do, they step up when you need them to.”

Next it was time for Spain Park’s leader to step up, and Greene did just that off a set piece in the 66th minute to the outside left of the box as she snuck a screamer into the left side of the net to tie the game at 3-3 for her second goal of the night.

While both teams continued to fight for chances, neither was able to score the game-winning goal over the next 14 minutes, which led to extra time.

After two scoreless overtimes and several chances for each side the well-played game ended the only way it should have—with penalty kicks.

Greene missed the goal entirely on the team’s first penalty kick and Gray, who had an incredible17 saves to that point, couldn’t stop the four shots sent her way as Oak Mountain won the penalty-kick shootout 4-2 to pull out a hard-fought win.

The night was one of many wins for Chris Blight who had been up since 3 a.m. preparing to welcome his and his wife’s second child who was born at 9 a.m. earlier that day.

Little did Blight know then that 12 hours later, he would pick up his 100th career win as well.

“We were up early and we’ve been going ever since. From the baby straight to the game,” Blight chuckled. “So thanks to my wife for letting me come.”

Oak Mountain improved to 4-1 in area play, while the Jags are now 2-1 in area play after the two teams split their regular-season matchups. Both control their own destiny when it comes to the postseason.