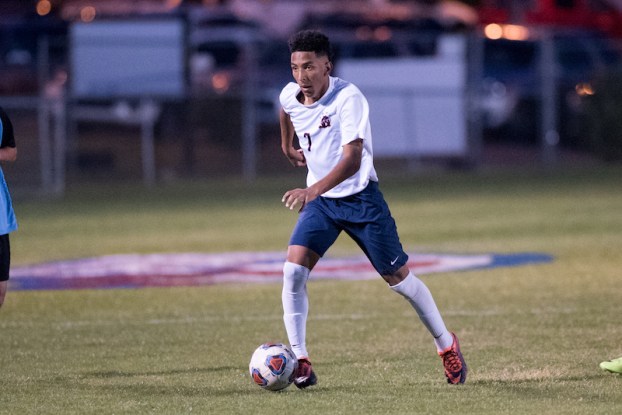 NORTH SHELBY – A quiet and scoreless first half on the pitch between Oak Mountain and Spain Park turned into a night of celebration 50 minutes later on Tuesday, April 10.

Two second-half goals from junior left-wing forward John Long propelled the Eagles to a must-win area victory, but also led to Oak Mountain head coach Dan DeMasters to his 100th win as a head coach with the Eagles.

DeMasters took over the Eagles’ soccer program in 2014 looking to continue a storied program that had won four state championships before he got there.

The pressure of the high-caliber job didn’t get to him at all, and in less than five years at the helm, he has won three consecutive state championships and has posted an overall record of 100-17-15 during that time span, making him arguably the best coach in the state.

The monumental win couldn’t have come on a more perfect night either.

With just one area game left against Mountain Brook following the home matchup with Spain Park, Oak Mountain was in a spot where a win was its best chance at keeping its playoff hopes alive.

The Eagles clearly knew how big the game was and it showed in the first half as they attacked the Spain Park zone again and again in the opening 40 minutes forcing the Jags to play some exhausting defense.

Oak Mountain got three corners and three free kicks from within 30 yards that all took place just to the right of the penalty box, but the Eagles couldn’t get any shots into the net.

Spain Park got just one corner in the first half and didn’t get its first true shot on goal until there was 16:49 left in the opening period, as the Eagles did a good job of keeping the ball away from the Jags’ strong attacking forwards.

With 6:05 left in the first half, sophomore Patrick Guffey got Oak Mountain’s best chance. After beating two defenders up field, one of which was right on his heals until he tripped in pursuit, Guffey caught Spain Park goalkeeper Justin Fisher out of position high up in the goalie box.

Guffey then fired a shot that actually went behind Fisher, but somehow the speedy rolling ball hit the far post and ricocheted out away from the goal instead of into the goal.

That was the best look for either team in the first half as it ended in a 0-0 tie.

Early in the second half, Spain Park looked like a much different team and came out with much more emphasis offensively. The Jags got two extremely good looks in the first nine minutes of the game, but both shots just missed right of the goal.

That was followed by a shift in momentum as Guffey broke free up the left side line for Oak Mountain shortly after and had a one-on-one with Fisher, but the Jaguars’ goalkeeper made another incredible save by coming out to challenge the ball before eventually kicking Guffey’s shot out of play.

The narrative quickly changed with 24:23 left when a night full of attacking by the Eagles finally paid off. That’s when Long, who had shown his speed and dribbling moves off throughout the game, put his first shot into the back of the net from just a few yards outside of the goalie box to break the 0-0 tie.

Spain Park was then forced to turn up the pressure to try and punch in an equalizer and it led to a corner kick as well as a free kick that was slightly closer than a corner over the next nine minutes.

Despite some good looks on both attempts, the Jaguars couldn’t ever get a shot into the back of the net and with 5:45 Long put the final nail in the coffin.

After the ball was batted around in congested traffic right around the top of the penalty box, Long found an opening and buried his second beautiful shot of the night between the posts for a 2-0 advantage, which led to the shutout win.

Oak Mountain moved to 8-7-5 overall this season with the win, but more importantly the Eagles are now 3-2 in area play with one area game left, which has set up multiple scenarios for postseason hopes as the Jags and Spartans can also still make the postseason.

Spain Park is now 1-2 in area play with two winnable games against Huffman remaining and one must-win game against Mountain Brook on April 17.

Pictures from the game available at www.shelbycountyphotos.com

By ALEC ETHEREDGE | Sports Editor PELHAM – Brendon Case knew that Chelsea had a chance to lock up a... read more