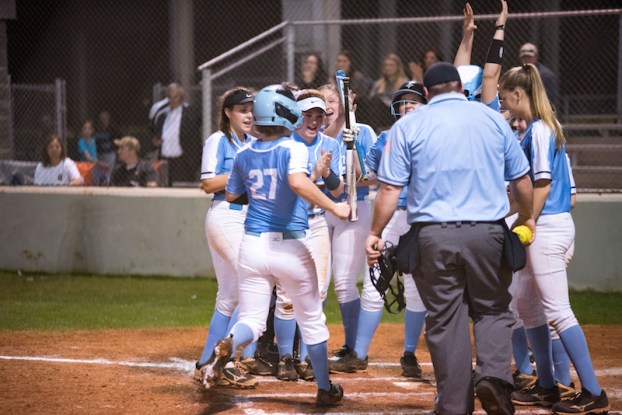 Helena’s Grace Robertson (27) finished with four RBIs including a two-run home run against Pelham on Tuesday, April 10, to help the Huskies defeat the Panthers 11-1. (File)

PELHAM–Sitting at 3-0 in area play, the Helena Huskies softball team needed one more win against Pelham on Tuesday, April 10, to finish perfect in area play and they did just that, taking down their rivals for the second time this season.

The Huskies defeated Pelham 11-1 and hit a pair of home runs to extend their current win streak to nine games.

After neither team could push a run across in the first two innings, it was Helena that broke through offensively in the top of the third inning.

With two outs in the inning and a runner on third, the Huskies began a rally starting with an RBI-double by Jamie Gregg to score Peyton Wilkins to make it 1-0. This was followed by an RBI-single by Chaney Handley to score Gregg and the exclamation point came from Grace Robertson. Up 2-0, Robertson hammered a ball over the right field fence for a two-run home run to cap off the four-run third inning.

Pelham cut the lead to 4-1 after an RBI-double in the bottom of the fourth inning but that’s as close as the Panthers would get.

Helena would double its lead in the top of the fifth inning as an error and single got things going for the Huskies. Robertson once again came through big with a two-RBI single to make it 6-1. A few batters later Tori White also hit a two-RBI single to give Helena an 8-1 lead.

The lead was too much to overcome for Pelham and the game ended one inning short because of a three-run home run by Katie Lively in the top of the sixth inning resulting in an 11-1 mercy-rule win.

In the circle, Avery Barnett gave up just two hits and pitched a complete game that included five strike outs and one earned run to get the win.

Helena now sits at 21-5 on the season and are playing with a tremendous amount of confidence as of late. The Huskies last loss came nearly a month ago against Oak Mountain on March 16.