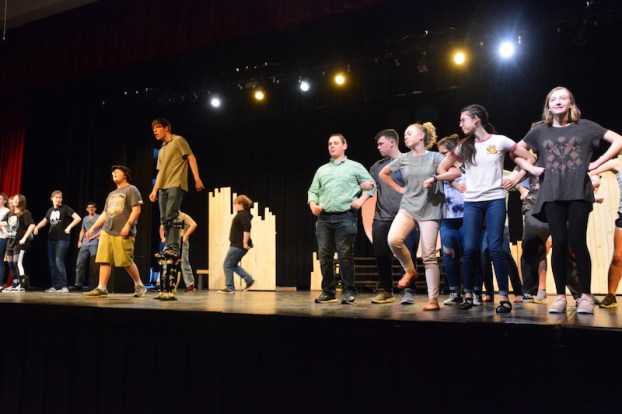 The cast of THS's performance of "Big Fish" rehearses a dance number before the show premiers on Thursday, May 3. (Reporter photo/Amalia Kortright)

ALABASTER – The Thompson High School Theatre Department is currently rehearsing for its performance of the Broadway adaptation of ‘Big Fish the Musical,” which is based on the novel by Daniel Wallace and the film directed by Tim Burton. “Big Fish” will be performed at the former THS location on 100 Warrior Drive at 7 p.m. each night from May 3-5.

“It’s a fun, heartfelt Alabama story,” director and THS teacher Jane Ganey said. “I think it will do well in the community and it’s a way to say farewell with our last performance.”

According to Ganey, this is the last time the THS Theater Department will perform at the school’s former auditorium.

“It’s pretty emotional. I’m sure that on the last night of the show it will probably hit home,” Ganey said.

Ganey said she considered staging “Big Fish” at the school’s new building, but ultimately decided not to make the cast and crew readjust to the new surroundings.

“With the learning curve of a new space, I thought it would take away from our attention to having a good show,” Ganey said. “I wanted them to be comfortable with the space that some of them have performed in for years.”

Junior Jay Sellers said he was very excited to play lead character Edward Bloom, and he wanted the role since he first heard one of the songs from the show, “Fight the Dragons.”

“Edward is a charismatic, charming individual with great ambitions of seeing the world. He doesn’t want to be chained down by growing up in a small town,” Sellers said. “I’m honored to be able to perform this with people I love.”

Tickets cost $5 per person until April 13, and the price will increase to $7 on April 16. Tickets will also be available at the door for $10. To purchase tickets or find out more about “Big Fish,” email Ganey at Jane.ganey@acsboe.org

From Staff Reports Take a trip to Wonderland with the Shelby County High School Theatre department this spring as they... read more