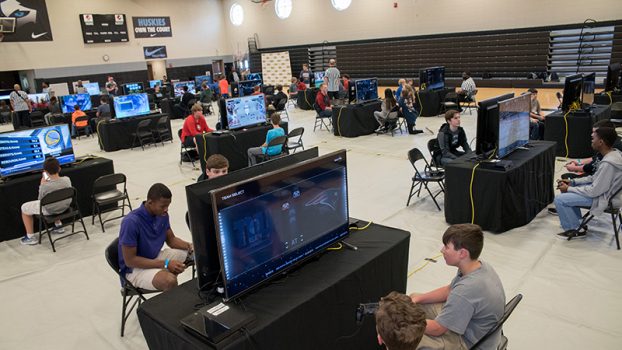 The Alabama High School Athletic Association announced that it will now allow E-Sports as a team activity for all member schools. (File)

MONTGOMERY – The Alabama High School Athletic Association Central Board of Control approved E-Sports competition for member schools at a board meeting on Thursday, April 12, and then made the announcement at a press conference later that afternoon.

E-Sports is an online gaming activity that allows students to compete with other schools and will now be offered to AHSAA member school students.

The Central Board approved a two-year experiment for E-Sports, which will be provided by NFHS Network Partner PlayVS.

“We’re trying to promote something that brings kids who aren’t playing sports back into the schools and something that gives them the opportunity to compete for their school,” AHSAA Webmaster Assistant Director Marvin Chou said. “We’re excited that kids can compete in something they are passionate about.”

Chou went on to say the sport will be offered at a minimal cost to the school and can be done as simply as just having a computer, a keyboard and headphones.

While that is the bear minimum for what will be needed and basic kit, it’s a start.

PlayVs is going to come in and run all of the competitions. They’ll set up all of the equipment and teams will just show up and compete.

A few of the games that will be offered are NBA 2K, Rocket League, Smite, League of Legends and ICONS.

Chou went on to say that different styles of games will include sports, action and adventure and multiplayer arena style games  with no guns or violence.

Schools can have multiple teams, while each team will consist of five students. One coach will overlook the team instead of having an individual coach for each different game.

Chou said they won’t call a champion a state champion, but instead a tournament winner with awards given out similar to duals in cheerleading.

Chou then added that it won’t be considered a sport right away, but said with the possibilities of virtual gameplay with kids up and moving around, that could change.

“We understand there will be some unkown early on, but our goal was to establish a plan, analyze the plan and then deal with issues that arrive to help make it better,” said Executive Director of the AHSAA Steve Savarese. “This is just good for the kids and that’s what we are all about.”

With a projected 20,000 kids playing video games online every day in the state, it’s an opportunity to reach more students and include them in a team atmosphere.

By GRAHAM BROOKS / Staff Writer MONTEVALLO–If you drove anywhere near the University of Montevallo’s campus the morning of Wednesday,... read more