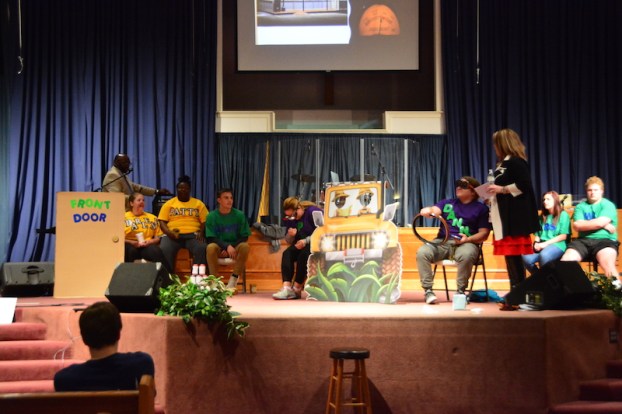 Students act out a scenario involving underage drinking, driving under the influence and the consequences of both at an April 12 assembly. (Reporter photo/Amalia Kortright)

COLUMBIANA – High school students at Cornerstone Christian School learned about the dangers of drunk and distracted driving at an assembly on the afternoon of Thursday, April 12.

During “A Night in the Life of a Distracted Driver,” which was organized by the Shelby County Drug Free Coalition, students performed skits and heard from Shelby County Circuit Court Judge Lara Alvis and Shelby County Community Corrections Executive Director Julius Cook.

“We’re trying to help you make really good decisions and not make mistakes that will affect you for the rest of your life,” Shelby County Drug Free Coalition Executive Director Jan Corbett said.

Alvis called several students up to the stage to act out a scenario in which they were at a party with alcohol. In the scenario, one of the students was involved in a wreck that injured another person, and all of the students at the party were arrested. The students in the skit also wore beer goggles to simulate the feeling of being drunk.

“You don’t know the law until you get in trouble, find out you’ve done something wrong and you’re sitting in front of me in a black robe and it’s too late,” Alvis said.

While she does not condone underage drinking, Alvis said she would much prefer that a teenager who is intoxicated call someone for a ride home than get behind the wheel.

Alvis also cited the recent death of Thompson High School student Camryn Calloway, who was killed in a car accident, when explaining the dangers of texting, eating, applying makeup or doing anything that diverts attention from the road while driving.

“The reason she was texting while driving was because she didn’t understand it was wrong to the extent that it was,” Alvis said. “If you are remotely close to your parents, or guardians or siblings, you do not want them to go through (Calloway’s) mother is going through.”

Cook gave his testimony of how his and his family’s lives were altered as the result of an intoxicated driver in an 18-wheeler. On Sept. 9, 2015, Cook said his father preached his last sermon.

“My dad was a pastor, a coach, a mentor, a friend and a father. All of the things you imagine a man could be, my dad was,” Cook said.

Cook said his father was killed on impact and his mother was in a coma for a month and a half. Cook spoke about the difficulty of explaining what happened to his mother when she woke up.

“She thought it was Sept. 10, her birthday. Do you know who was the first person she asked for? My dad,” Cook said. “What does she do? The man she’s loved for 40 years is gone.”

The driver, who was high on marijuana at the time of the wreck, is currently serving out a prison sentence.

To close out the presentation, Alvis asked students what they would have done if they were the judge in that case.

“Once you make this decision, you have forever altered the course of your life,” Alvis said.