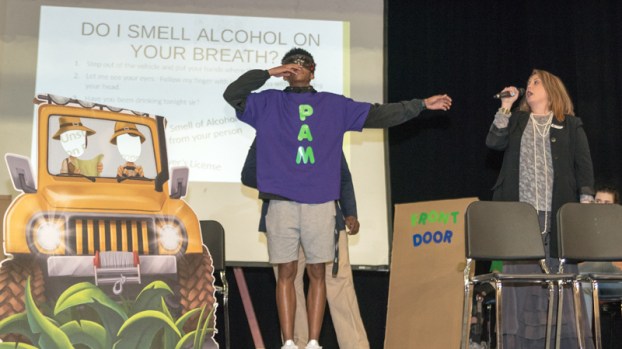 A presentation at Spain Park High School on April 11 was intended to remind students of dangers associated with drunk and distracted driving. (REPORTER PHOTO/KEITH MCCOY)

HOOVER – The Shelby County Drug Free Coalition sponsored a presentation at Spain Park High School on Wednesday, April 11, intended to remind students of dangers associated with drunk and distracted driving leading up to the school prom.

Shelby County Circuit Judge Lara Alvis asked the attendees how old a person has to be to drink, transport or buy alcohol—or to be at a party where alcohol is being consumed.

The answer to each question is 21 years old.

“If you remember one thing from our presentation today, please remember that,” Alvis said and stressed that even if someone at a party with alcohol is not drinking, he or she can still be in violation of the law.

Alvis then introduced Nicole Allshouse, a media consultant and host of Talk of Alabama.

“I hope her story will be a huge wake-up call,” Alvis said.

Allshouse said that when she was 4, asleep at home in Ohio, a 19-year-old drunk driver drove a vehicle into the family’s home—and specifically her bedroom.

The vehicle struck Allshouse and pinned her against a closet door, breaking numerous bones.

“They really didn’t think I would live, much less walk again,” she said.

Allshouse spent about 20 years in the hospital, undergoing painful therapy and surgical procedures.

“I didn’t have a normal childhood like the rest of you,” she said and stressed that a bad decision like driving a vehicle while impaired can have negative consequences for many people’s lives. “It changes somebody’s entire life.”

People who drink have many options to get home instead of driving, including a taxi, Uber, friends or even calling their parents.

Allshouse urged the students to think about the people they care for before taking the wheel impaired.

“It’s just not worth it,” she said. “Why ruin your whole life?

Alvis led several students in a skit to demonstrate the dangers of alcohol.

In the skit, a drunk driver is pulled over and, along with a passenger in the vehicle, taken to jail after failing a field sobriety test.

Then, police arrived at the party to arrest underage drinkers.

Presenters also said distracted driving, such as texting or changing music on a phone, can be equally dangerous.

“I don’t text and drive, but I reach down and change the playlist,” Alvis said. “I do that.”

“If you drink and drive, I’m going to put you in jail,” Alvis said. “Nobody has ever come before me and said, ‘Judge, I meant to kill somebody.’”

The final guest speaker was Julius Cook, who works in community corrections in Shelby County.

Cook told students about his mother and father, a pastor, being in a wreck caused by a drunk driver in 2015.

Cook’s father was killed in the wreck, and first responders initially thought his mother was dead too.

After being in a coma for about a month and half, Cook’s mother woke up and asked for her husband.

“Some days, she wishes it was her instead of my dad,” Cook said. “How painful is that?”

Cook urged students not to text or drink and drive, and Alvis reminded them that they would be charged if they injured someone.

“Don’t come to the courtroom looking for sympathy after you’ve made a selfish decision,” Alvis said.

By GRAHAM BROOKS / Staff Writer MONTEVALLO–If you drove anywhere near the University of Montevallo’s campus the morning of Wednesday,... read more