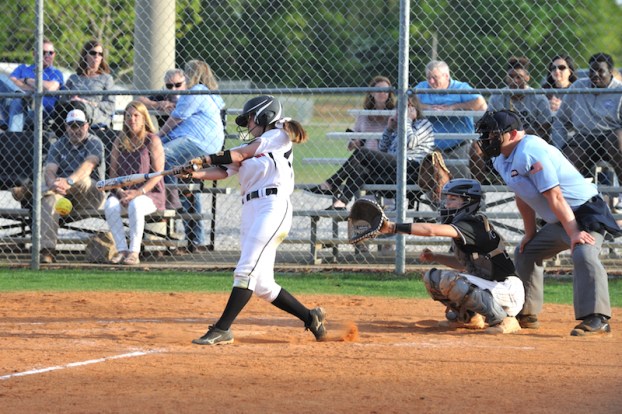 Thompson won its 14th consecutive game and improved to 4-1 in area play after taking down Hoover on Thursday, April 12. (For the Reporter/Larry Dancy)

ALABASTER – Thompson softball continued to roll through its competition on Thursday, April 12, as the Warriors notched their 14th consecutive win and avenged their 12-10 loss to Hoover back in March as they beat the Buccaneers handily by a final score of 11-2.

Thompson (34-5) broke up a 2-2 tie with a monster fourth inning as five players notched at least one RBI in the frame.

Kennedy Foote kick-started the inning with a bang sending her sixth home run of the year over the left field fence. After a ground out, the Warriors put the next five batters on base including back-to-back doubles from Abby Kellogg and Kindall DeRamus to put Thompson up 5-2.

The Warriors added two more runs in the bottom of the 5th inning to finish off the dominant area win. The offensive explosion nearly overshadowed a fantastic six-hit complete game from Thompson pitcher Madison Holtzaphel, who surrendered just one earned run in the contest with four strikeouts while not allowing a walk.

DeRamus led the Warriors with two hits, two RBIs and three runs in five plate appearances, while Lauren Haskins turned all three of her walks into runs.

Madison Bubel also had a great night driving in three runs off her two hits while drawing a walk.

A total of nine players got a hit for Thompson putting 10 hits and nine runs on the Hoover starter.

Sitting at 4-1 in area play, the Warriors are a win against Tuscaloosa County from winning the regular-season area title, which would set them as the host of the area tournament.

The No. 3 ranked Warriors will finish off the regular season with home games against Tuscaloosa County on Tuesday, April 16 and McAdory on Thursday, April 18 with both games scheduled to start at 4:30 p.m.