MONTEVALLO – A felony criminal mischief charge brought against a former Montevallo city attorney and mayoral candidate has been dismissed after he paid restitution to the city of Montevallo, according to Shelby County Circuit Court records. 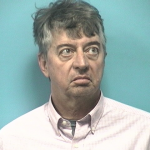 Circuit Court Judge William Bostick dismissed the first-degree criminal mischief charge against 65-year-old Steven Ralph Sears on April 12, noting the dismissal will not be finalized until Sears pays $1,600 in restitution to the city of Montevallo.

The Montevallo Police Department arrested Sears at his Montevallo residence on Oct. 11, 2013, and charged him with the crime after police alleged he attempted to burn the “Bulldog Bridge” pedestrian bridge near the Montevallo High School football field on Oct. 5, 2013. At the time of Sears’ arrest, Montevallo Police Chief Jeremy Littleton said multiple previous attempts had been made to burn the bridge.

First degree criminal mischief is a Class C felony. If convicted, Sears could have faced between one and 10 years in prison.

Before the charges were dismissed, Sears argued the bridge was located on his property, and filed a report from two certified property appraisers supporting his claim.

COLUMBIANA – Members of the Columbiana community gathered in the auditorium of Shelby County High School for a gospel concert... read more