Dodson’s art is from the heart

For Rae Lynn Dodson, what began as a way to keep busy during relocation has turned into a lifelong love affair with art. Originally from Homewood, Lynn and her family moved to a new home in Shelby County just as she entered high school. It was not a popular decision with her at that time.

“I felt like I was leaving all of my friends behind and moving to the middle of nowhere,” she explained, laughing. “My mother tried to help me with the transition by finding new activities.” 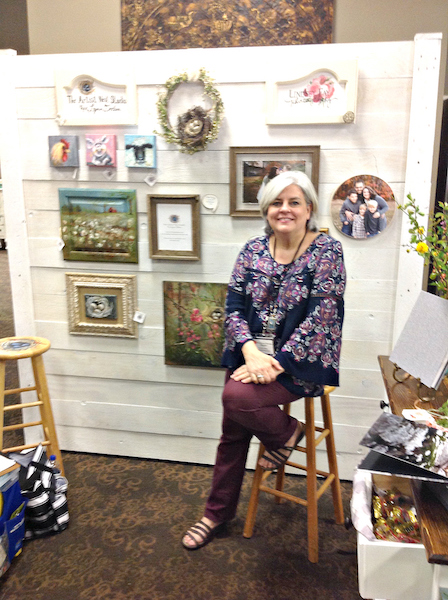 For Rae Lynn Dodson, art is life and she celebrates it through her work. (Contributed)

As it happened, a local artist and relative by marriage offered evening art classes in the basement of his home. Mr. Orville Allen introduced many in south Shelby, included Rae Lynn, to painting. She began lessons the summer before her sophomore year in high school and hasn’t stopped since.

When she entered the University of Montevallo, her reputation as a Shelby County High School basketball player preceded her. In fact, UM’s women’s coach tried to persuade her to major in Physical Education and play basketball with the possibility of a scholarship. However, art was what she knew – or what she thought she knew. “Actually, I barely knew what a portfolio was at the time,” she said.

She discovered very quickly how much she had to learn as her coursework included drawing, painting in oils and acrylics, and sculpture. As she studied, her heart found another love in a young man named Rusty. Starting a marriage and family left her little time for school and, thus, Lynn postponed her degree until later in life.

When her third and youngest child was older, Rae Lynn decided it was time for her to complete her studies at Montevallo. As he has in every other aspect of life, Rusty supported her decision and encouraged her along the way. She admits that she took her classes much more seriously the second time around and began to develop the talent that she believes is God-given.

After graduation, Lynn began her 20-year career as a professional artist by giving private lessons to five students at Columbiana’s Elvin Hill Elementary School in 1998. Since then, studio locations have changed, but the number of students under her tutelage continues to grow. In 2005, she partnered with the Shelby County Arts Council. She now teaches a variety of classes at the Council’s studio on Mildred Street, and exhibits her work there regularly. “Working with the Arts Council has been a joy in my life,” Lynn said.

Now hailed as one of Shelby County’s best, Lynn loves painting scenes from nature and custom portraiture. She offers clients work in oils, acrylics and mixed media designs. Dodson prefers painting children because of the innocence she finds in their features. To see examples of her work or to contact her with your own project, visit her website at Raelynndodson.com or on Facebook at Facebook.com/artistsneststudio.

A new PastPort to discovery

By RENE’ DAY / Community Columnist The countdown to Alabama’s 200th birthday has begun, and from now through 2019, new... read more