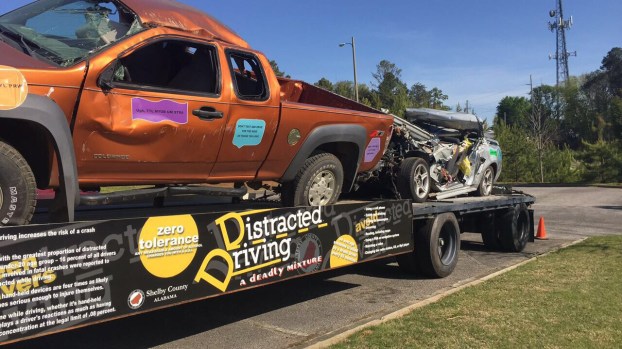 Vehicles that were involved in distracted driving accidents were on display at Pelham High School to show students the dangers associated with driving distracted or under the influence. (Reporter photo/Briana Harris)

PELHAM – Pelham High School students received a sobering message about the dangers of driving distracted or under the influence on Thursday, April 12, just days before their prom, which was on Saturday, April 14, at Embassy Suites in Hoover.

PHS juniors and seniors attended a distracted driving presentation sponsored by the Shelby County Drug Free Coalition and hosted by Shelby County Judge Lara Alvis. During the presentation, Julius Cook with Shelby County Community Corrections shared his personal story about how an accident involving someone who was driving under the influence impacted his life.

Cook shared the heartbreaking story about how his father was killed and his mother severely injured when an 18-wheeler, driven by someone under the influence of marijuana, jackknifed and hit his parents’ car.

It was a Wednesday night, Sept. 9, 2015, just one day before his mother’s birthday and his father had unknowingly just preached his last sermon. The last words his mother remembers hearing from his father were, ‘Hold on baby.’

“My mom was in a coma for a month and a half,” Cook said to an audience of high school students who for the first time during the assembly sat in complete silence. “She died five times and had to be resuscitated.”

In the hospital, she lay hooked up to more than $3 million worth of lifesaving medical equipment. Cook told the students about how his mother didn’t recognize her children when she first came out of the coma. But she did remember her husband, and Cook and his siblings had to tell her that he was dead.

The driver of that 18-wheeler now sits in prison.

“Does that make me happy?” Cook asked redundantly. “No, it doesn’t because I would much rather have my father back.”

The students also participated in a skit that showed the possible repercussions associated with driving distracted or under the influence. During the skit, an inebriated student caused a severe crash, and was arrested along with his underage passenger. The arrest led police to the house party the students came from, and every underage attendee at the party was arrested.

“If you come in front of me in Columbiana, I’m going to put you in jail,” Alvis said. “No one ever means to kill someone in these types of situations, but the fact that you didn’t mean to means nothing at that point.”

Alvis also educated the students about the laws regarding underage drinking.

“If you are at a party and you’re under 21 and there’s alcohol there – even if you weren’t drinking – you’re going to get arrested,” Alvis said. “You have to be 21 to even go to a party where there’s alcohol present.”

She left students with something to think about.

“Do you want to live with the fact that you killed someone or put someone in the ICU because you were changing the song on your playlist?” she said. “You don’t get to pick your victim.”