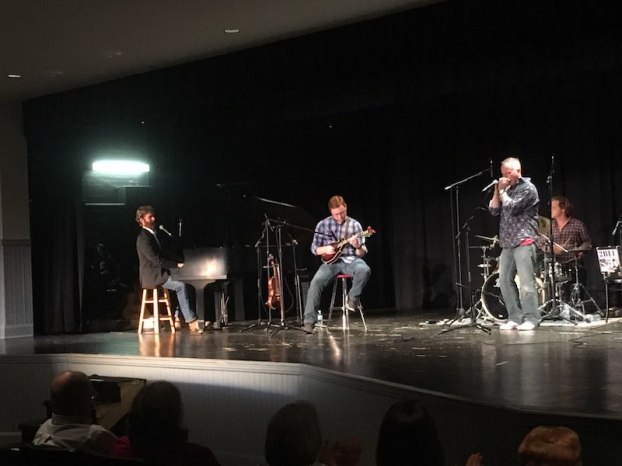 COLUMBIANA – Members of the Columbiana community gathered in the auditorium of Shelby County High School for a gospel concert that featured popular “Sean of the South” blogger Sean Dietrich during the Pickin’ and Pound Cakes event on Friday, April 13. The event doubled as a concert and a pound cake baking competition.

During the concert, Dietrich sang old hymns and told stories about his life. Around 150 people attended, according to teacher and event organizer Rachel Bevilacqua.

“I think it was a very unique experience for our school to offer a gospel singing, and I think people enjoyed it a lot,” Bevilacqua said.

According to Bevilacqua, the school first came into contact with Dietrich through late former teacher Steve Latham, and Dietrich’s blog has since become popular among many Columbiana residents.

“Any time we can introduce people to what he does, we want to do it,” Bevilacqua said.

Dietrich said he first visited SCHS students last year, and another voluntary assembly was held during school hours on the same day as Pickin’ and Pound Cakes. Over 100 students attended.

“I just love Columbiana. Steve Latham was the first to reach out,” Dietrich said. “I really had no idea what I was doing, still don’t, but less so back then.”

Through his visits, Dietrich said he is glad to have become well-acquainted with some locals.

“With people in Columbiana, it’s like Mayberry,” Dietrich said. “People here are very family-ish. I feel like, perhaps, I’ll know some of these people until I die.”

PELHAM – Pelham High School students received a sobering message about the dangers of driving distracted or under the influence... read more