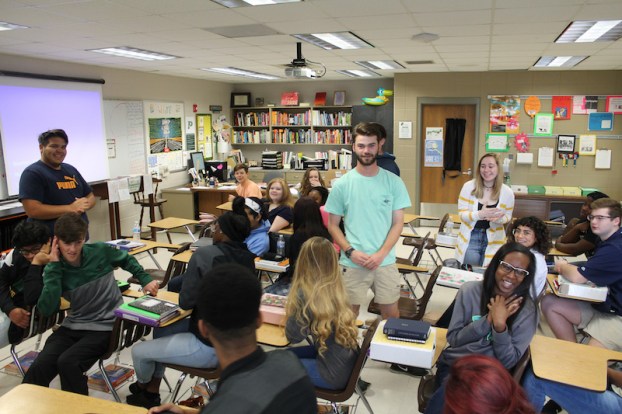 PHS students reveal their courage by standing and speaking for their causes. (Contributed)

Still grading and planning at 11 p.m., I’m on Google—searching. Google’s new doodle posts at midnight Eastern time so, in Alabama, we see tomorrow’s Google in the 11th hour. Nestled on the Google search page, Maya Angelou smiles serenely at me.

In my English classes, we study the Civil Rights Movement as part of American Literature. We also study the writing, film and audio from this era hoping to replicate its power.

King was a master of multimedia before the coining of the word. We watch his “I Have a Dream” speech, listen to his final speech in Memphis and read an excerpt of “Stride Toward Freedom.” We watch an actor’s portrayal of King penning his “Letter from a Birmingham Jail” and a video of Bobby Kennedy’s Indianapolis speech sharing the news of King’s death.

Angelou’s eulogy for Coretta Scott King captivated my classes. Angelou finishes by pledging to King that in honor of her friend’s life, she will “never cease.” Calling for “a better world,” Angelou vows to stand for “peace…honesty…fair play…kindness and justice.”

Inspired by Angelou, my students prepare to stand for their causes. To speak today, students must stand. Immediately, school safety comes up.

“I stand for prayer in school,” Dorian Tolbert says.

Many others stand. They write and submit causes and plans.

Kennedy’s words soothed the crowd as he shared the pain of his own brother’s death five years earlier and encouraged his listeners to seek wisdom and pray. The podcast ends with John Lewis’s final thought about these leaders. “They gave us hope.”

My students stand bravely, speak eloquently, write honestly and share abundantly on all media. My students give me hope.