Vincent Elementary School must be a shining star in the Shelby County School System. “Our school became a Leader in Me School in 2010 and has since become the first Lighthouse School in Shelby County,” Principal Dr. Borden-Hudson said.

The Leader in Me program is designed to teach 21st Century leadership and life skills to students with the aim of tapping into their full potential of greatness. 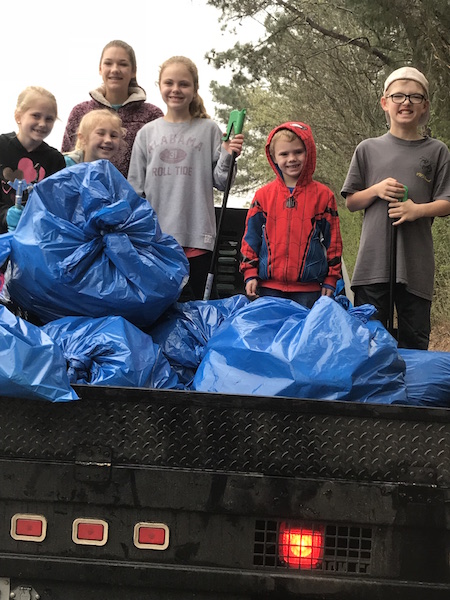 The transfer of learned skills outside the classroom is often questioned by those unfamiliar with the program. The answer is yes, they are applied elsewhere; most especially when students have teachers and parents as good role models.

It was interesting to hear recently about a Facebook post regarding the litter problem in Vincent and the call for volunteers to join a student cleanup activity. Knowing Earth Day (April 22) is around the corner, an inquiring mind investigated.

“While riding by an area minutes from our house one day, my daughter Ava (4th grade) noticed the large amount of trash on the side of the road and we began to talk about it, which sparked an idea and then a plan of action,” VES teacher Ashley Waldrop said. “My family and Josh Field’s family are sick of the litter in our community. We both feel the need to lead by example for our kids and community members.”

So, a few weeks ago, on a drizzly rainy Saturday, a small group of young people led by role model adults walked for several hours on both sides of a one-mile stretch of Highway 62 resulting in about 20 large bags filled with litter – an entire truck bed of trash tossed on the roadside by others.

Listening to these little people talk while picking up trash, one (younger) said to the other (older), “This is Habit 3 right?” Ava, the group activity’s inspiration quickly responded, “Well, kind of, since Habit 3 is ‘Putting First Things First’ because this is work before play.  But, this is really Habit 1 – Be Proactive!”

Earth Day is April 22 and the children talked about another event for that weekend. Half of all litter is deliberate, according to Alabama PALS who promote “Don’t Drop it on Alabama!” activities.

The city of Vincent is sponsoring a city-wide clean-up Friday, April 20 through Sunday, April 22. Residents can avoid dumping fees by using the dumpsters that will be brought into the city.

While sharing the story of our future leaders, I was told of an elder leader in the community.  Mr. Robert Kidd, a former council member for Vincent, has reportedly taken on litter in his area for years. It is told he has a trash bag with him on his daily walks and organizes community clean-up days which conclude with a hot dog lunch.