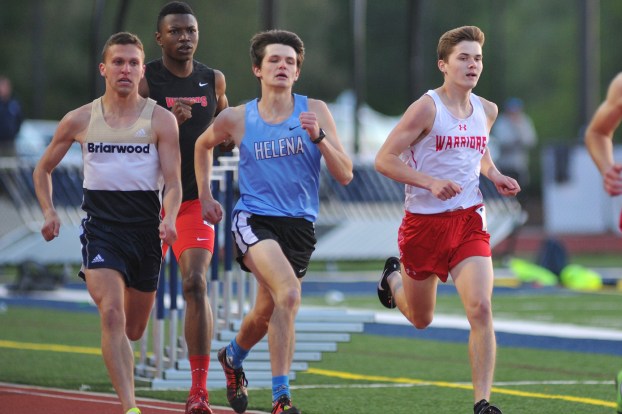 Host school Briarwood had the strongest showing of the 2A-5A teams competing in the Shelby County Championship. (For the Reporter/Larry Dancy)

NORTH SHELBY – The final week of the regular season saw Shelby County’s best track and field teams competing against each other at the 2018 Shelby County Championship held on Monday, April 16, at Briarwood Christian School.

Competing against the county’s best teams in all classifications, Briarwood, Calera and Vincent all had strong showings at the event. A recap from the 2A-5A tams is below.

Among the 2A-5A schools competing in the event, Briarwood had the highest finishes with the boys finishing third in the team standings and the girls finishing fifth.

Just behind Domingue in that same event was Andrew Sherrod, who finished second.

Briarwood also picked up a team win with a first-place finish in the 4X100-meter relay.

For the girls, Sophie Muir-Taylor and Morgan Hutchinson had impressive showings in the 400-meter dash taking second and third, respectively.

Phillip Douglas was the boys’ highest finisher of the event after he took third in the shot put.

The next highest finisher came from Cornelius Brown, who finished fourth in the long jump and fifth in the high jump. The boys’ 4X100-meter relay team also finished in fourth.

The only Calera athlete to finish in first came in the girls’ 300-meter hurdles as Syncere Henderson took the top spot on the podium.

Niya Maye also had an impressive finish by taking third in the 100-meter dash.

As a team, the girls were able to pick up a third-place finish in the 4X100-meter relay.

Vincent’s boys and girls both finished seventh in the overall team standings after a few impressive performances as well.

Tae McGregor was the Vincent boys’ highest finisher with his second-place finish in the 100-meter dash. He then went on to finish just one spot lower in third in the 200-meter dash.

Chris Hardie and J.T. Youngblood also had nice performances in the shot put. Hardie finished in fifth, while Youngblood was a spot lower in sixth.